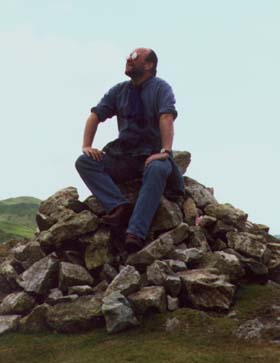 This was the occasion of the first international sangha retreat. Ngak’chang Rinpoche sits on Bird Rock at the conclusion of a teaching and transmission of Dzogchen Men-ngak-dé. Bird Rock is an ancient sea cliff which now lies five miles inland from the North Welsh coast. Cormorants still nest there after 50,000 years in which the sea has no longer crashed at the base of the cliff. On this occasion Ngak’chang Rinpoche spoke of a local protector who animates the place with her presence. It is a particularly powerful spot for Dzogchen teachings and it was here that Khandro Déchen took her naljorma ordination in 1991.