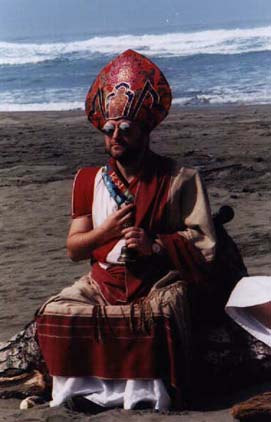 Ngak’chang Rinpoche engaged in ‘jin-sregs’ – fire ceremony – on the beach at ‘Whale Rock’. This ceremony was carried out on the final day of the ordination retreat in 1997 in California. This retreat was attended by apprentices of the East and West Coast of America, and also by apprentices of Great Britain and the European Continent. Almost 100 apprentices attended the 10 day retreat, including apprentices of Ralzhig Pema Legden and of Ngala Nor’dzin and Ngala ’ö-Dzin. Ngak’chang Rinpoche holds the bell and vajra of Jomo Menmo, the previous incarnation of Khyungchen Aro Lingma. This bell and vajra are the most sacred of all the existing treasures of the Confederate Sanghas of Aro.