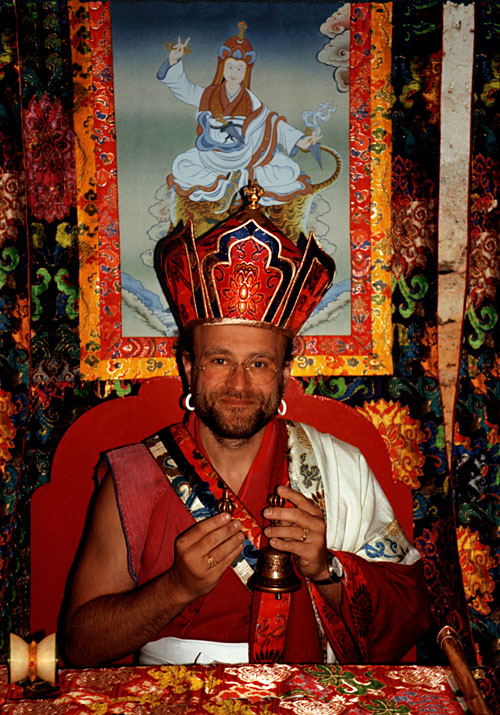 This photograph was taken on the first international retreat of the Confederate Sanghas of Aro in July 1993. On this wonderful occasion Ngak’chang Rinpoche and Khandro Déchen gave an unprecedented number of empowerments and transmissions ranging throughout the three inner Tantras. The retreat was held in Snowdonia, North Wales, at a place near Bird Rock. Ngak’chang Rinpoche gave teachings on Dzogchen men-ngag-dé on the crest of Bird Rock and sang the ‘Flight of the Vulture’ sem’dzin publicly for the first time. Teachings were given on gTormas, and each apprentice was given instructions on gTorma for his or her personal practice.

In this picture, Ngak’chang Rinpoche is wearing the Ögyen Ped-zha (o rGyan pad zha) hat, which is worn by lineage holders of the Nyingma tradition. The golden vajra on top of the hat was presented to him by Gyaltsen Rinpoche. On this occasion Rinpoche wore his oldest yogic waistcoat, which has been bleached almost pink by the sun during his earliest retreats in the Himalayas.

Rinpoche said at the time that he wore it as a reminder of practice and as a link with his training:
We never cease to be practitioners. Our training simply continues - and that makes us who we are. This is our life together and the dynamic which links us to all other Nyingma practitioners. There is nothing which cannot be accomplished through practice and devotion to the lineage. We are a small family within the larger family of the Nyingma tradition – and those who have travelled to Nepal will realise what it is to be welcomed by distant relations. The only thing which can be respected about any of us is our degree of devotion towards Padmasambhava and Yeshé Tsogyel – and this is what links us to the broader tradition. I have worn this old waistcoat since my twenties, in the presence of many great Lamas of all schools, and it is now the most precious rag I possess. Unlike me, my waistcoat had the advantage of being in a non-conceptual state in the presence of so many masters. Maybe one day I can aspire to being its equal.

Khandro Déchen comments:
Those who have attended teachings with Ngak’chang Rinpoche will be familiar with his style, and the way he has of making the ordinary meaningful – and also of making meanings ‘ordinary’ as a way of displaying the magic of our own existence.

Vajrayana is known for its wealth and richness of symbolism, and in this picture one can see this distilled into the two symbols which exemplify the path – the bell and vajra which represent wisdom and compassion.