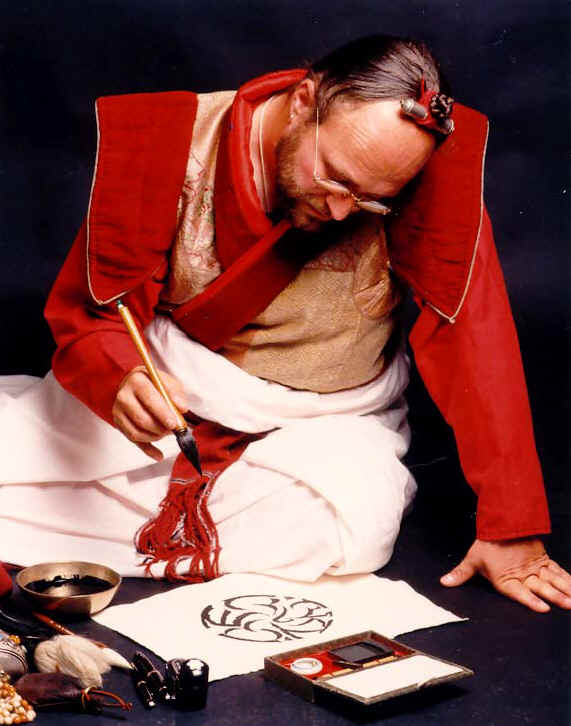 This photograph was taken at the Chapter Art Centre in Canton – Cardiff in 1987 when Ngak’chang Rinpoche was requested to give a demonstration and exhibition of Tibetan calligraphies. Rinpoche has often been asked to give classes in calligraphy but he has always maintained that there is nothing to teach – as there is no tradition of spontaneous calligraphy in Tibet as there was in China and Japan. Ngak’chang Rinpoche comments:
It was Chögyam Trungpa Rinpoche who first adapted the style of Zen calligraphy to the Tibetan alphabet, and he developed a style around it in terms of the practise of the A-shé stroke (A shad) the single stroke calligraphy which exposes the mind of the calligrapher. Although there is no tradition of spontaneous calligraphy in Tibetan or the Trans-Himalayan regions, various Lamas—such as Tai Situ Rinpoche—have taken it up. Each Lama has an individual approach and a tradition does not seem to have emerged yet. It may never emerge – and I am certainly not inclined to think of what I do as something worthy of being evolved into a tradition. I merely enjoy producing calligraphies simply because people seem to like them and because art in various forms has been part of my life since childhood.