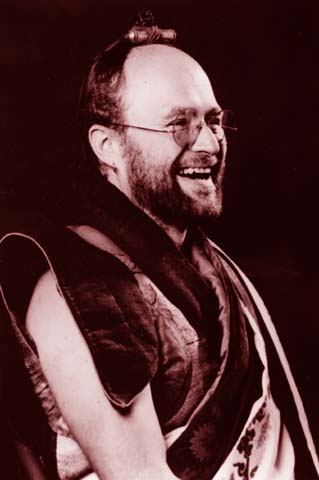 Ngak’chang Rinpoche’s laughter is characteristic of his presentation of Vajrayana. In this photograph he wears an old Tibetan to-nga (waistcoat / vest) given to him by Ngak’chang Khamtrül Yeshé Dorje Rinpoche. He is wearing the takdröl ornament in his hair which was given to him by Kyabjé Chhi’mèd Rig’dzin Rinpoche in 1988 in Cardiff, Wales. Takdröl means ‘liberation on wearing’ and signifies the Lama’s completion of the first two ‘Lama Cycles’ – the first cycle is ‘the cycle of practice and study’ and the second is ‘the cycle of retreat and accomplishment’.

Ngak’chang Rinpoche lived for a period of time with Ralzhig Pema Legden in a small village called Hartgrove. Ralzhig Pema Legden met Ngak’chang Rinpoche through his work at Element Books – the publisher of three of Rinpoche’s books: Great Ocean, Rainbow of Liberated Energy and Journey Into Vastness. Rainbow of Liberated Energy has been rewritten and published as Spectrum of Ecstasy by Aro Books (1997) and Shambhala Publications (2003). Journey Into Vastness has been rewritten and published as Roaring Silence by Shambhala Publications (2002). Great Ocean, an authorised biography of HH Dala’i Lama, was republished by Penguin. During Rinpoche’s stay in Dorset (1989-1990) he wrote the first draft of Wearing the Body of Visions (Aro Books, 1995).