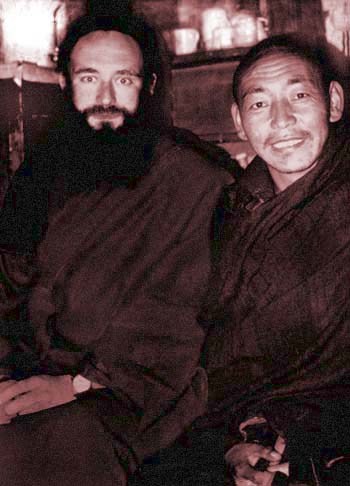 Ngak’chang Rinpoche says of that time:
I loved to practise with the monks from Gyütö – they were exceptionally kind to me – and although I was never even adequate in chanting in the Bull’s Roar style – I enjoyed the experience immensely. I always remember that period as a time of great contentment and simplicity. I had no plans, and no thought of what the future might hold. I had no concept of teaching or of having students. I had no knowledge of factional religious politics and theological divisiveness, or of dharma-gossip. The atmosphere in India and Nepal in the early 1970s was remarkable – and I count it as one of the greatest good fortunes of my life that I was able to spend so much time there. One of the most important aspects of my time studying and practising in the East was the possibility of receiving transmissions and blessings from Lamas of all schools. Having received such transmissions, it has always been my pleasure to tell people that for me any form of sectarianism is a breakage of vows. I may practise as a Nyingmapa, but have damtsig with every tradition, and maintain those links to the best of my ability. Sectarianism destroys the heart of any tradition which perpetrates it – and so it always gives me great joy to honour the connections which exist between Khandro Déchen and myself and the many wonderful Lamas we have had the privilege of meeting. I wish it were possible for more people in the West to experience a greater degree of innocence in the initial phases of practice. All too often this important period of establishing practice is jeopardised by journalism and by those who take it upon themselves to raise doubt in people’s minds.

Ngak’chang Rinpoche described this area to students once in a talk about India and Ladakh:
In those days the route to Leh was only trodden by the hardy, and was completely untenable for vehicles of any kind – especially through the wild Chamba valley, where I used to practise gÇod. One had to climb down into that valley by rather precipitous tracks. It was often necessary to edge down steep inclines, which did not quite equate with mountaineering, but got as close as I wanted to get to such a pursuit. I am still in awe of the way that Ngakpa Dawa used to navigate such routes burdened as he was by an often substantial sack of materia medica. I never made the seven week journey to Leh on foot myself – even though I thought often of attempting it. In 1992, however, I was able to make the journey with Khandro Déchen and our students – but much of the journey was possible by then with transport. Nevertheless – we had to cross the Rotang Pass on foot and walk for a week to reach Sa-ni Gompa in Zanskar – which is situated on the site of one of the eight great charnel grounds. On our way we passed the ‘mountains of Mahakala and Mahakali’ – places I had previously longed to visit. Ngakpa Dawa had once offered to take me with him along this route, but he passed away before I was able to avail myself of such a marvellous experience.