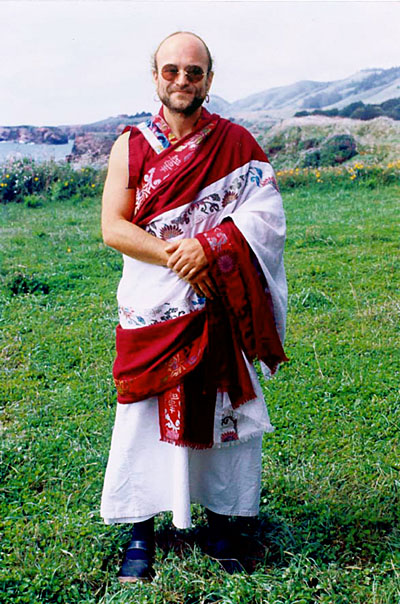 An hour north of Fort Bragg takes you to some of the finest and wildest scenery of the Coast of Northern California. The retreat place is situated on the cliff top and over looks the Pacific Ocean which is often far from pacific. This photograph of Ngak’chang Rinpoche was taken on the cliffs overlooking ‘Whale Rock’ near the place we have held apprentice retreats since 1989. It is a wonderful place and many happy memories are tied up with it. It makes a splendid venue for the Dzogchen practice of ‘sky gazing’ and for ‘integration with the elements’.

Ngakma Shardröl comments:
One of the most intense aspects of our retreat venue is the sea. Because Ngak’chang Rinpoche is English—and maybe also because he is Ngak’chang Rinpoche—he likes to encourage sea bathing after we practice sKu-mNyé on the beach. The water is intensely cold and Rinpoche takes great delight in informing us that it is a wonderful method for reminding ourselves that we are actually alive. Rinpoche says that ‘ … most people maunder around in a warm fuzzy haze of indistinct torpor, and would be immensely benefited by a cold plunge on most days of their lives.’ I asked Rinpoche if the English generally liked swimming in cold water, to which he replied that they did not but that he did not really regard this water as being that cold. ‘It cannot be below 40° Fahrenheit – but then I think I am a little old fashioned when it comes most things.’ I have probably swum in that Ocean dozens of times now – and I must say that it is starting to feel almost normal.

Ngak’chang Rinpoche loves the coast line at Fort Bragg and says that it reminds him a great deal of Cornwall – which is where Khandro Déchen’s family originate. He says that the sea is an inspiring setting for Dzogchen practice as the elements are so alive there. Khandro Déchen is Cornish by decent and she, Ngak’chang Rinpoche and their family go there at least once a year for a private family retreat on which Cornish apprentices join with them on one evening for a celebratory meal.