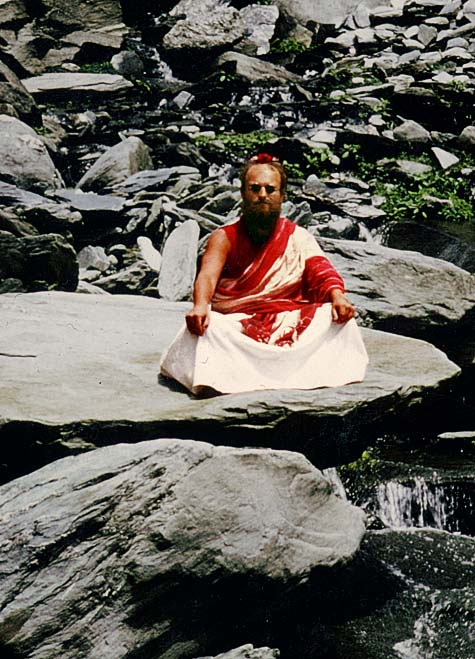 Ngak’chang Rinpoche in the mountains of India

This photograph was taken in 1981 in Kangra, Himalayan foothills, Himachal Pradesh, Northern India around the time of one of Ngak’chang Rinpoche’s long solitary retreats. It was taken by Venerable Gélong Thubten, who looked after Ngak’chang Rinpoche in several of his retreats. Gélong Thubten came from a Nyingma family and practised Tröma Nakmo alongside the practices of Gyütö in McLeod Ganj, near Upper Dharamsala, to which he was associated.

Ngak’chang Rinpoche told students about this time when he was describing the practice of Namkha Artè (nam mKha’ ar gTad) the ‘Sky Direct’ practice of Dzogchen:
… and a valuable place for this practice for me was always the waterfalls above McLeod Ganj. There was a huge flat rock on which I used to sit. With the roaring of the waterfall behind me and the vast sky which opened out in front of me it was an ideal place. I felt immensely grateful to have found such a wonderful place for practice and went back there as often as I could. Kyabjé Künzang Dorje Rinpoche had advised me to seek out such places for Namkha Artè practice and he told me that when I wandered into the Chamba Valley beyond Triund I would find many marvellous places. I stayed at Triund many times in retreat and have the happiest memories of that area.