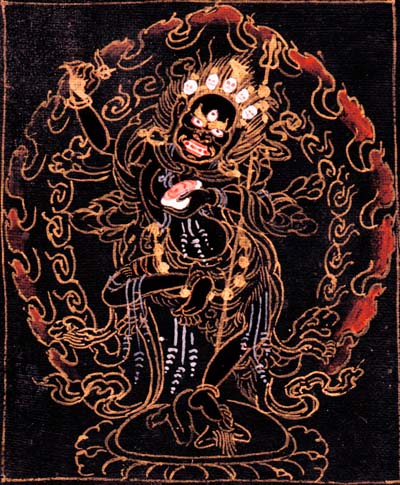 tsak-li of the Black Wrathful Mother

This image is a tsak-li, a miniature thangka painting used to confer empowerment. This beautiful tsak-li was given to Ngak’chang Rinpoche by Yeshé Dorje Rinpoche in 1982. Tröma Nakmo was the main practice of Yeshé Dorje Rinpoche and through it he accomplished the power of weather control. Yeshé Dorje Rinpoche was famous throughout the Himalayas as a char-gÇodpa – a rain stopper. He often stopped the rain on occasions when His Holiness the Dala’i Lama was giving public teachings and ceremonies in the open.

Ngak’chang Rinpoche has used this tsak-li of Tröma Nakmo on various occasions – to give empowerment of Tröma Nakmo both from the Aro gTér and Düd’jom gTér. Whilst Ngak’chang Rinpoche studied with Yeshé Dorje Rinpoche, Tröma Nakmo was also his main practice, and he learnt a great deal of what he knows of Mahayoga ritual from Yeshé Dorje Rinpoche – of whom he says:
Khamtrül Yeshé Dorje Rinpoche was an expert on the Mahayoga practices of Tröma Nakmo from the Düd’jom gTér, and many people went to see him to be cured of illnesses through his power in that practice. He was known as an exorcist – a Lama who could release malignant energetic infestations. I was fortunate enough to have been able to have accompanied him on several trips to perform shé-dür in people’s homes when someone was troubled by some form of mental disturbance. His capacity to cure people was extraordinary.

Khandro Déchen says of Tröma Nakmo:
Her furious staring eyes – burn the fabric of duality. Her snarling mouth is the expanse in which neuroses are self-liberated in their arising. The whiplash of her tongue is the flickering of emptiness and form. Her hair flies upward in a billow of flame. Within the midst of flaming hair the head of a black sow rises up. The hideous shriek destroys every trace of dualism in the three times. She wears the wrathful five-skull crown as the sign of her power to transform neurotic emotions. She is the Black Wrathful Mother – the vajra-butcher who hacks apart the body of the gÇodma and gÇodpa in preparation for the feast which supplies all needs and repays all karmic debts. She wears the six human bone cemetery ornaments which demonstrate her accomplishment of the six Tantric vehicles. She wears the conch yogini earrings in display of her mastery. In her left hand she holds the skull bowl – the symbol of wisdom. The white bone of the skull is the male quality of spacious-passion. The red frothing oceans of menstrual blood within the skull bowl is the female quality of passionate-space. In her right hand she holds the thunderbolt flaying knife which butchers all dualistic contrivances. She carries the khatvangha trident which leans in the crook of her left arm where it seductively subdues all uncompassionate motivation. The three points of the khatvangha pierce the fabric of attraction, aversion, and indifference. The secret nature of the khatvangha is Khroda Padmakara – the Wrathful Lotus Master who is her secret inner method nature. She dances in the dakini posture, in display of the energy of the natural state.