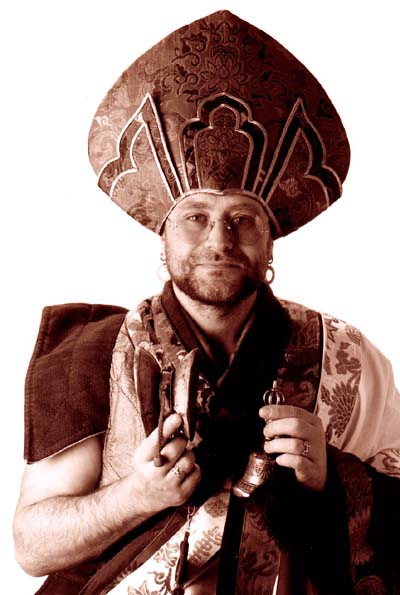 This photograph of Ngak’chang Rinpoche was taken at the conclusion of an empowerment of Yeshé Tsogyel he gave in New York City. Ngak’chang Rinpoche is wearing the Dorje Zarhorma hat worn by Lamas of the Nyingma Tradition. It is symbolic of the crown of the King of Zahor – given to Padmasambhava by the King in token of his acceptance of the Tantric Buddha’s spiritual authority. The hat is composed of layered lobes of brocade which symbolise the lotus flower.

Ngak’chang Rinpoche says of the lotus:
The lotus flower is central to the teaching of Vajrayana – because it displays the transformational quality of Tantra. The lotus plant grows out of a slimy pool but when the flower emerges it is untouched by the noisome water. Naturally the flower gains its sustenance from the very noisome water by which it remains unblemished. We have here a wonderfully interwoven image – an integrative dichotomy in which the flower and water cannot be divided. The first expression describes Tantra and the second describes Dzogchen – and through this means one can see the relationship between Tantra and Dzogchen expressed quite perfectly.