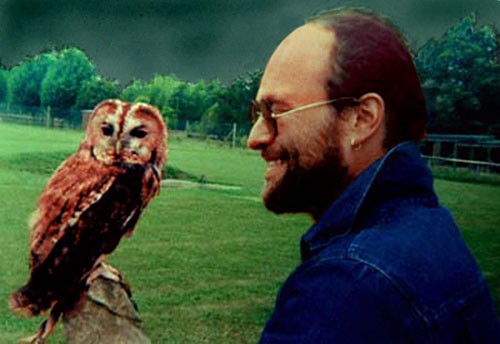 Ralzhig Pema Legden recalls:
Ngak’chang Rinpoche loved holding the owl and they both seemed to be grinning at each other. Ngak’chang Rinpoche stood there looking at the owl for a long time – until the handler couldn’t take it anymore, at which point Ngak’chang Rinpoche apologised for having been remiss about the time, and thanked the handler for his time. I knew at the time that the Ojibwa medicine-man Sun Bear had given Rinpoche the Indian name Staring Owl, and so I asked Rinpoche what the connection was, and why he had such a liking for owls – but he just smiled and said, For certain reasons, which are—I must say—of a particular nature. It was only years later when Ngak’chang Rinpoche introduced me to Protector practice that I understood something about owls in relation to Ngak’chang Rinpoche.