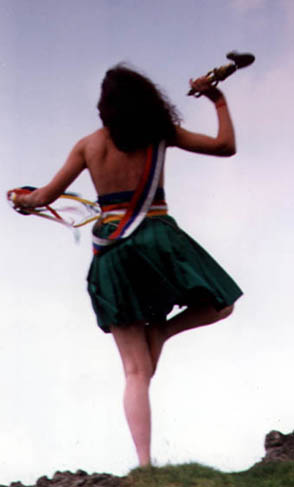 performing the ordination gar’cham of the Confederate Sanghas of Aro

Khandro Déchen took naljorma ordination in the Confederate Sanghas of Aro in 1991. She spent many weeks in solitary retreat preparing for the ritual which culminated in the celebration of her vajra commitment with a gar’cham of Khyungchen Aro Lingma. The gTértön offered this dance to her disciples as dam-ngak for those taking ordination. Most of the practitioners of the first Aro Gar in Tibet took either naljorpa/ma ordination or ngakpa/ma ordination. Khyungchen Aro Lingma felt that the revival of these traditions, which were first transmitted by Padmasambhava at the time of the first spread, was of paramount importance. This is why even in the West, where culture might consider it odd to take such vows, they are viewed as being of the utmost import.