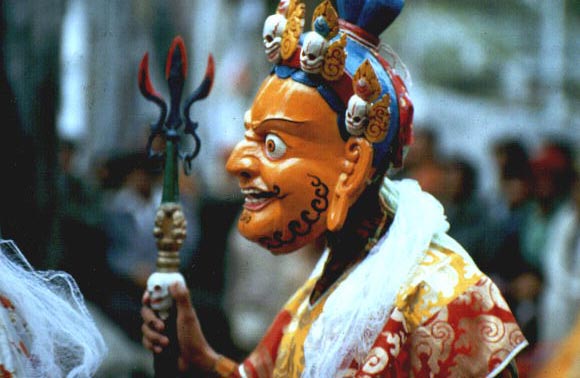 The dancer in the photograph is Nyima ’ö-Zér – the manifestation of Padmasambhava who pinned the course of the sun with the gesture of his hand. Nyima ’ö-Zér is the epitome of all yogis. He carries the khatvangha trident carried by travelling ascetics for over two thousand years. He wears the five skull crown worn as the symbol that he has realised the wisdoms, which are the transformed energy of the five dualistic emotions.

On this occasion Gyaltsen Rinpoche and Ngak’chang Rinpoche visited the Padmasambhava caves high above the sacred Lake of Tso Pema and spent some time with their friend Ani Bumchung – a yogini who has lived most of her life in retreat in the hills above Tso Pema in the retreat caves presided over by Lama Wangdor Rinpoche.