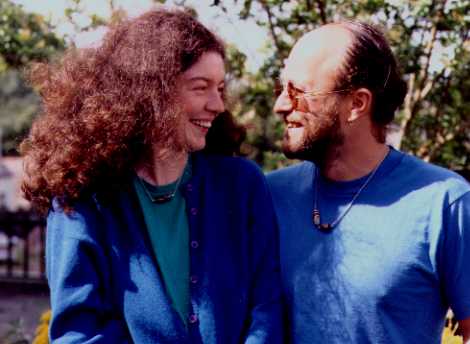 The harmonious and happy relationship of Ngak’chang Rinpoche Khandro Déchen is both an inspiration and example to their apprentices. Relationship as practice (as expressed in the teachings of the Khandro Pawo Nyida Mélong Gyüd) is a central teaching within the Aro gTér lineage. Ngak’chang Rinpoche lived for a period of time in Bangor, Gwynedd, North Wales, where he and Khandro Déchen enjoyed walking and meditating in the mountains of Snowdonia.

Ngak’chang Rinpoche and Khandro Déchen are wearing gZi stone ornaments in the style originated by Khyungchen Aro Lingma. Wearing gZi stones is common amongst Tibetans, but they are usually worn with a coral on either side. Wearing them as solitary stones became a tradition in the Aro Gar, and came from the original inspiration of Aro Lingma’s aunt Jomo Chhi’mèd Pema, a Dzogchen long-dé yogini, who possessed a wealth of knowledge relating to stones. It was Jomo Chhi’mèd Pema’s custom to wear a plain pebble on a leather thong. This pebble was inherited by Jomo Pema ’ö-Zér, who in turn gave it to her daughter – Aro Lingma. Aro Lingma wore this pebble until it was replaced by a nine-eyed gZi stone given to her by her disciple Ngak’chang A-Kyong Düd’dül Dorje. In the Aro tradition the chu-mig (water eyes) of the gZi represent the eyes of the protector Za Rahula – and signify that one was bound to one’s practice by the energy of Za Rahula. Today, gZis and other related stones are worn by most apprentices in the Aro sangha.