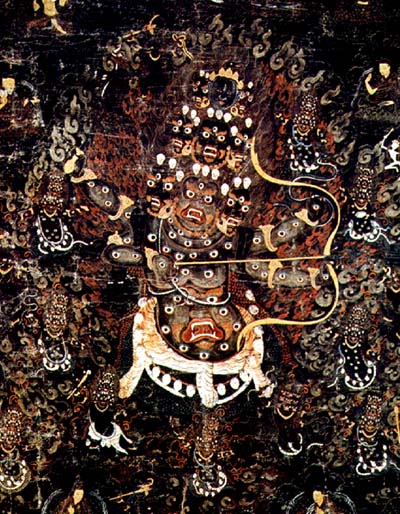 The ‘Giver of Constant Trouble’ is a friend to all those practitioners who value constant trouble if they are in danger of breaking their vows.

The ‘All Killer’ is a friend to all those practitioners who value the destruction of hidden areas of cherished narcissism. Ngak’chang Rinpoche comments:
Rahula is a terrifying blackness which is vibrant with eyes. An horrific mouth gapes in his belly and all the twists and turns of narcissistic rationale are devoured. There is not the slightest leeway with the practice of Raksha Rahula – he holds the noose around ones neck, and if one is an authentic yogi or yogini – one feels that noose at all times.

The word Raksha is applied to a cannibal demon and connotes savagery and untamed ferocity. With regard to Raksha Rahula as a protector of the Vajrayana, ‘savagery’ relates to the situation in which clever linguistics or sophisticated reasoning are of no avail. To maintain the Fourteen Root Vows, a practitioner will rely on the Savage Slaughtering Demon to destroy his or her dualistic rational.

Khandro Déchen said of Raksha Rahula:
Rahula is the most wrathful of the protectors, and his practice is reserved for those whose level of seriousness is beyond question. To see Rahula as one’s best possible friend, requires deep experience in practice and a level of devotion to one’s Lama which is based on real experience. This thangka of Raksha Rahula is painted in the nak-thang style. It has a black ground upon which Raksha Rahula is painted in red, white and gold. The image thus produced is one which instills a great sense of menace. Raksha Rahula emerges out of a blackness from which he is inseparable. He is surrounded by minions who fulfil his enlightened intention of helping practitioners to maintain their vows.

Two statues of Rahula exist within The Confederate Sanghas of Aro – one painted by Ngak’chang Rinpoche, and one very fine copper statue.

Within the Aro Gar, A-yé Khandro and A-shé Khandro were supreme yoginis in the practice of Raksha Rahula – so much so, that ravens circled above them on many occasions.