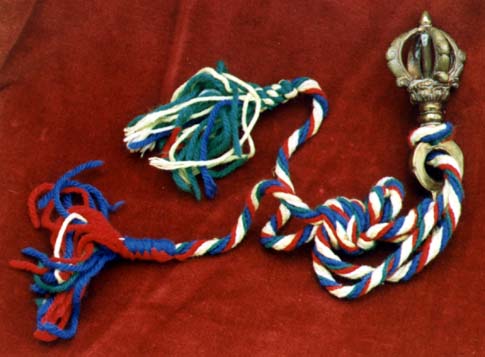 throttling the life-breath of dualism

The thunderbolt noose is one of the implements of the Vajrayana which are made from a wide variety of materials according to the exact manner in which they destroy duality. The vajra noose can be made of snakes, elephant hide, or any of a great number of skins. Here the noose is made of a five-coloured cord – which represents all types of noose.

This particular cord is one which Ngak’chang Rinpoche used for nine years as a means of divination. It was made for him in 1979 by Namkha’i Norbu Rinpoche when he gave teachings of Dzogchen men-ngag-dé in Norfolk, England.

Ngak’chang Rinpoche and Khandro Déchen said of the vajra noose:
The vajra noose throttles the life-breath of dualism. In order to make personal sense of this image – one needs to imagine the experience of being unable to breathe – of how that might feel. The urgency with which one would wish to draw breath is similar to the way we attempt to keep duality alive. A Zen Master was once approached by a disciple who said that he wanted enlightenment more than anything in the world. The Master plunged his disciple’s head into a bucket of water – and held it there until his disciple was kicking and thrashing. He then let him up for air. Just before the disciple got his breath back, the Master told him that when he wanted enlightenment as much as he had wanted air to breathe – he would then be qualified to make the statement he had made. This story sheds an interesting light on the function of the vajra noose.

The bronze vajra which is linked to this noose is part of a special set of Vajrayana implements which belong to the Confederate Sanghas of Aro.