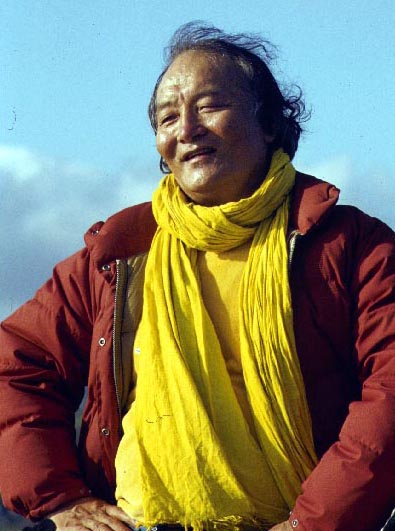 Director of the Dzogchen Community

Chögyal Namkha’i Norbu Rinpoche has been teaching in the West since 1964. He is the founder and spiritual director of the Dzogchen Community, a worldwide association of non-monastic practitioners who practise the three series of Dzogchen: Sem-dé, Long-dé and Men-ngak-dé. He was born in Gé-ug Chongra (dGe’ug lCong ra) in the province of Dérgé (sDe dGe), Kham, Eastern Tibet, in 1938 (8th day, 10th month, year of the male earth tiger). He was recognised at the age of two (by Palyul Yang-srid Rinpoche and Zhéshen Rabjam Rinpoche) as an incarnation of the Nyingma gTértön A’dzom Drukpa (gTer ston ’Gro’dul dPa bo rDo rJe A ’dzom ’brug pa, 1842-1924). ’

At the age of eight he was recognised (by HH the 16th Karmapa and the previous Situ Rinpoche) as the incarnation Lhodruk Zhabdrung Rinpoche (1594-1651 – an incarnation of Pema Karpo, 1527-1592). He received a monastic education in the Sakya tradition in his home region (at Dérgé Gonchen monastery) and then proceeded to study with many great Lamas including the female Lama A-yo Khandro Dorje Paldrön (A yo mKa’ ’gro rDo rJe dPal sGron, 1838-1953). A-yo Khandro was a disciple of Jamyang Khyentsé Wangpo and Nyala Pema Düd’dül. She was a gTértön and a remarkable Dakini, who lived in dark retreat for over fifty years.

Chögyal Namkha’i Norbu Rinpoche’s most widely known books, The Crystal and the Way of Light and Dzogchen – The Self-Perfected State, have introduced many people to Dzogchen, and he is highly appreciated throughout the West as the major contributor to Western knowledge on this profound subject. Namkha’i Norbu Rinpoche is an extraordinarily prolific and accomplished scholar in the fields of both Bön and Buddhist traditions of Dzogchen. His other works include the fascinating Necklace of gZi – a cultural history of Tibet and Drung, Deu and Bön – narrations, symbolic languages and the Bön traditions in ancient Tibet. Namkha’i Norbu Rinpoche is also a poet whose Little Song of ‘Do As You Please’ presents a marvellous insight into the practical application of poetry as a means of teaching in terms of life events. The following two verses taken from this poem are characteristic of his humour and acute insight into institutionalised attitudes:

In the natural condition, the supreme space
which does not fall into the limits
of measurement or even the concept of direction,
Whatever presents itself there,
I enjoy as an ornament.
I don’t make any effort
to create or reject anything.
You who take up preferences,

Do as you please.
Directly in the space of the dimension
Of original purity,
I meet all meditative experiences,
manifestations of energy, and visions
in a state of equanimity.
With no need to desire
artificial religious practice, I am happy.
You who dwell on mental constructions,
Do as you please.