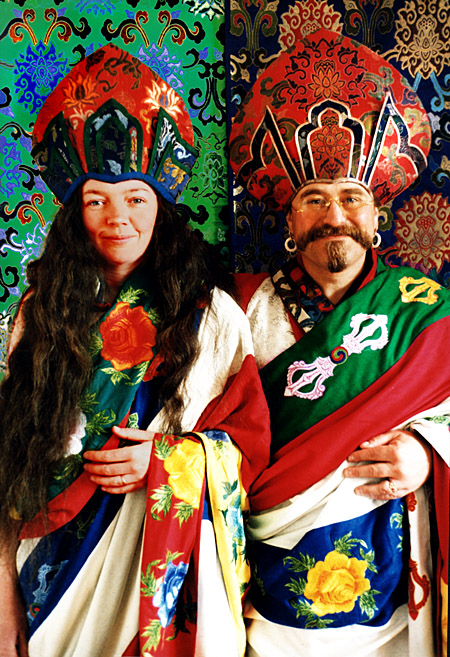 This photograph, taken in June 1999, shows Ngak’chang Rinpoche and Khandro Déchen as the lineage holders of the Aro gTér – wearing the ‘joyous’ lineage shawls (a ro dGa’ ba sKu gZan). These shawls are usually only worn when giving empowerment – particularly of the ‘joyous class’ of yidam.

Empowerment shawls such as this exist within many Nyingma lineages, and their forms vary according to the gTérma tradition to which they are related. Examples can be seen in photographs of Lamas such as Kyabjé Künzang Dorje Rinpoche – and each portrays a particular aspect of the Vajrayana teachings. The wearing of spectacular apparel relates with the rôle of the Lama manifesting as the yidam into whom he or she is giving empowerment.

Ngak’chang Rinpoche has continually insisted regarding this that:
The vivid costume of the Vajrayana is sometimes misunderstood by those who are not fully conversant with the meaning of ‘transformation’. In the West, we are often accustomed to ‘importance’, ‘rank’ or ‘status’ being displayed through elaborate costume – but this is not the case in terms of the Vajrayana, where only the very greatest Lamas give empowerment in simple or ragged clothing – and where some, such as Milarépa or Khyungchen Aro Lingma, sometimes chose to be naked. For Lamas such as ourselves to wear elaborate costume is merely a reflection of our incapacity to give empowerment without supports.

In the Aro gTér there are three types of empowerment shawl worn by the lineage holders – which relate to the three categories of yidam: peaceful, wrathful and joyous (Shi, Ga’, and Trö – zhi ba, dGa’ ba, and khro bo). The peaceful shawl (a ro zhi ba sKu gZan) is similar to the ngak’phang shawl (sNgags ’phang gZan) worn by most Lamas of the gö-kar-çhang-lo’idé (gos dKar lCang lo’i sDe) but it has a broad central blue stripe which relates to the transmission of Ati-yoga (shintu naljor – shin tu rNal ’byor gyi theg pa). The peaceful shawl and wrathful shawl (a ro khro ba sKu gZan) is identical for the male and female lineage holder – but the joyous shawls are different, inasmuch as they reflect the inverse pattern of each other. The ‘play’ depicted by these two shawls is an expression of the Khandro pawo nyi-da mélong gyüd (mKha’ ’gro dPa bo nyi zLa me long rGyud).

The joyous shawls relate with method display and wisdom display and their infinite mutually illuminating interactions. This is a reciprocal depiction, in costume, of the yab-yum imagery-such as Ögyen Menlha or Ögyen Chenrézigs.