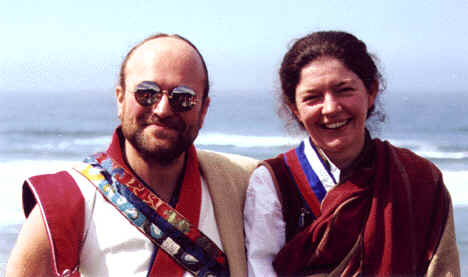 Ngak’chang Rinpoche and Khandro Déchen on the beach near Whale Rock after the fire ceremony which concluded the 1997 ordination retreat. The fire ceremony incorporated the burning of the clothes worn by the newly ordained immediately prior to their ordination. The gomtags worn by Ngak’chang Rinpoche and Khandro Déchen display the emphasis within the Aro gTér lineage on the inner Tantras. The colour reversal in the way the gomtags are worn is indicative of the reversal of the solar and lunar channels in women and men. For women the solar channel is on the right hand side and lunar channel is on the left. For men the arrangement is the reverse.