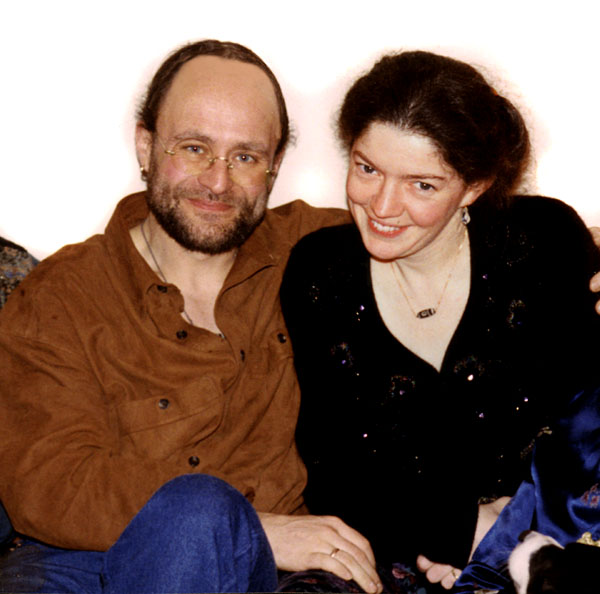 Ngak’chang Rinpoche lived for several years in North Wales with Ngakma Pema Zangmo and Ngakpa ’ö-Nyi Dorje. This photograph was taken at their house in Cællepa, a delightful enclave at the hilly wooded end of the town of Bangor. During their courtship Khandro Déchen came often to spend weekends in Bangor with Ngak’chang Rinpoche. At that time Khandro Déchen had two dogs, and she and Ngak’chang Rinpoche would take long walks in the countryside together. It was on these walks that they often discussed the evolution of apprenticeship and how best to establish a good foundation for the understanding of vajra commitment in the West.

Khandro Déchen comments:
Rinpoche and I have discussed the importance of vajra commitment in relation to Vajrayana on country walks since 1981. When he first began to teach it was the subject which most concerned him – and when the first students began to gather around him, he put a great deal of effort into pointing out the differences between the ‘spiritual friend’ model of the Sutras and the ‘vajra master’ model of Vajrayana. Rinpoche stressed from the beginning that Vajrayana leads nowhere without the rôle of the vajra master and that this had to be the basis of everyone’s understanding whether they elected to enter vajra commitment or not. We often talked about how people could best be introduced to vajra commitment and to the rôle of the vajra master. Rinpoche observed very early on that people were apt to confuse the rôles of the ‘spiritual friend’ and vajra master in Tibetan Buddhism – and that as a result, the centrality of the vajra master was in danger of being eroded. It is interesting in view of the advent of ‘Western Buddhism’ in the 1990s that this was one of Rinpoche’s earliest concerns.

Rinpoche, however, found it uncomfortable to speak on the vajra master in terms of himself in that rôle. It was for this reason that vajra commitment—in our sangha—became a choice that one could make after some years of practice, rather than a vow which was automatically taken through yidam empowerments.