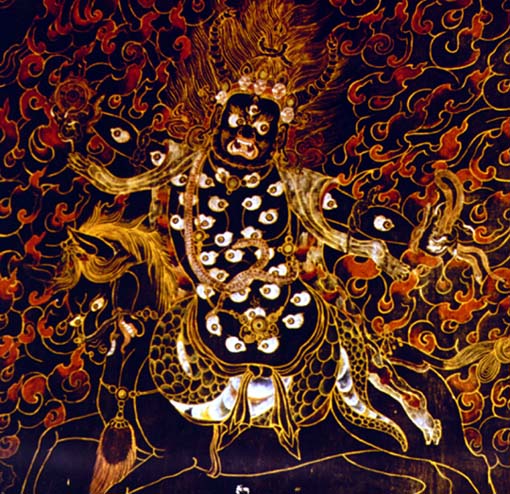 The minions of Rahula, like the minions of any protector, are an expansion of the powers of the Protector in terms of the presentation of an escalating degree of detail. Ngak’chang Rinpoche comments:
The quality of the function of the protector’s minions is perhaps the most accurate use of the term ‘over-kill’ – except here the idea is not based on fear or the neurotic need to make every situation safe. Rahula deals with the immediate context of our tendency to subvert the commitments – whereas Rahula’s minions deal with the diffuse, more intangible, context of our unrecognised conditioning. When karmic conditioning, in terms of hidden primary causes, meets unlikely yet dangerous secondary causes – the minions are there presenting their unlikely forms.

This minion is called Digpa Tsara Ru-chan srin (sDig pa ra tsa ru can mGo srin) or Dig-ra Ru chan -srin (sDig rwa Ru can srin). This scorpion horned minion rides a demonic black horse in the manner of many of the personal protectors which belong to gTérma lineages. He is covered with eyes in the manner of Za Rahula. In his right hand he holds the wheel of the teachings and in his left the vajra noose made of the entrails of vow-breakers.

The scorpion is seen as the epitome of negativity and thus is the symbol that anything and anyone, anywhere can be transformed through the methods of Vajrayana. This is why the scorpion appears in so many wrathful Vajrayana images. It is found on the Wrathful empowerment shawl of the Aro gTér Lineage – and on the seals of many Tantric Lamas.

When the apostate king Langdarma attempted to destroy Buddhism in Tibet, Nubchen Sang-gyé Yeshé terrified Langdarma by performing the dig-dzub mudra (sDigs mDzub) – pointing his forefinger at the sky in the manner in which a scorpion arches its tail. With this ‘scorpion gesture’ he manifested a scorpion the size of nine yaks. Having seen this, Langdarma retreated, promising not to persecute the Vajrayana of the gö-kar-chang-lo’idé.