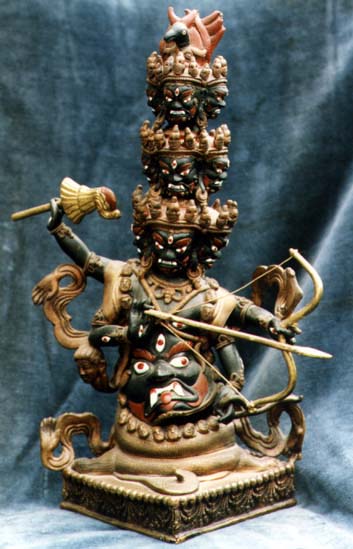 Za Rahula (gZa gDong ra hu la) is the protector who seizes the sun and the moon and eclipses planets.

This statue displays attributes which are common to all Nyingma lineages. Khandro Déchen wrote of Za Rahula:
Za Rahula holds a makara-headed vajra club, and the bow & arrow with which he seeks out vow-breakers and ‘destroys’ them with wisdom and compassion. The bow is the compassionate means with which the arrow of perfect insight is released. The wrathful Aro gTér yidam Trö-nak Ögyen Jampalyang (Khrodakala Uddiyana Manjushri) is connected with Za Rahula in terms of the wrathful function of his bow and arrow. Not only does Za Rahula have nine heads, he has eyes ornamenting both his body and arms. No movement away from the maintenance of vows escapes his notice. The gaping mouth in his stomach consumes all depraved and degraded attempts to manipulate the meaning of the Fourteen Root Vows of Vajrayana.

Za Rahula has dominion over the eight classes of demon (these eight demonic classes refer to various types of mundane ‘spirits’ who can cause either help or harm, but remain invisible to normal human beings: kingkara (ging); mara (bDud); tsen (bTsan); yaksha (gNod sByin); raksha (srin po); matari (ma mo); rahula (gZa gDong); and naga (kLu).) These eight classes are essentially linked with the dualistic manifestation of the eight distorted modes of consciousness.