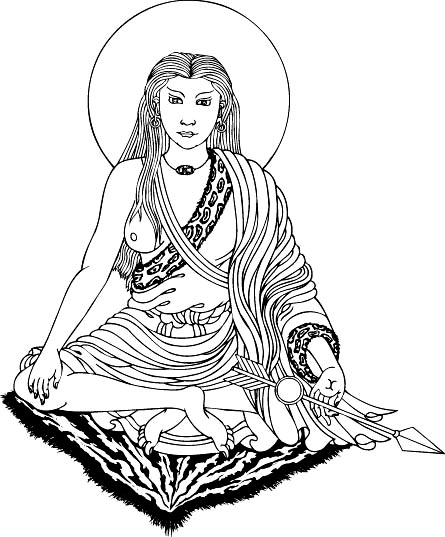 A-shé Tashi Pema Khandro (A shes bKra shis pad ma mKha’ ’gro) was one of the two Sang-yums of Aro Yeshé. (She was the older sister of A-yé Khandro – Aro Yeshé’s other sangyum. It was not unusual in Tibet for several sisters to marry one man, or for several brothers to marry one woman – although this was more typical in farming communities.)

A-shé Khandro is shown here wearing a chuba trimmed with leopard skin. Leopard skin-trim was often adopted by brigands in Kham and Golok, but it is also one of the symbols of the dakini. She wears her chuba in the Khamba style with one coat sleeve removed and wrapped into her belt behind her back. She sits on a tiger skin in token of her mastery as a yogini and wears her hair loose in the Phodka Ling-ngé (phod ka ling nge – free flowing hair style) which was characteristic of the yoginis of the Aro Gar. She wears conch yogini’s earrings and at her throat she wears a gZi stone in token of ‘The Poisoned Lightning Noose of Za Rahula’ which binds one to one’s vows. She wears the gomthag of a naljorma and holds the da’dar (mDa’ dar – long life arrow) in her left hand. The da’dar carries a mélong – the wisdom mirror which is the primary symbol of Aro Lingma. Her right hand rests upon her knee in the Dzogchen mudra of ‘Mind resting in natural comfort and ease’.

A-shé Khandro was inordinately fond of animals – so much so that many of the wild animals in the area were remarkably tame. There was no hunting in the area, by the insistence of A-shé Khandro. (The game which was eaten within the gar came from regions outside the Aro valley.) A-shé Khandro could attract the presence of eagles in the sky with her voice, and they would swoop down very close to her. The two girls were regarded as Dakinis and therefore whatever they did was regarded as an inspiration. Whatever they did was acceptable, no matter how strange; and their behaviour was often very strange. They would laugh often for no evident reason. Once Aro Yeshé passed on the transmission of the Aro gTér to A-yé Khandro and A-shé Khandro – and subsequently to the yoginis who were his five adoptive mothers; he never taught again. All teachings and transmission after that point were given by A-shé Khandro and A-yé Khandro. Aro Yeshé manifested secret activity as a khandropa – whereas A-yé Khandro and A-shé Khandro exhibited powerful external manifestations of the teaching as pamos.