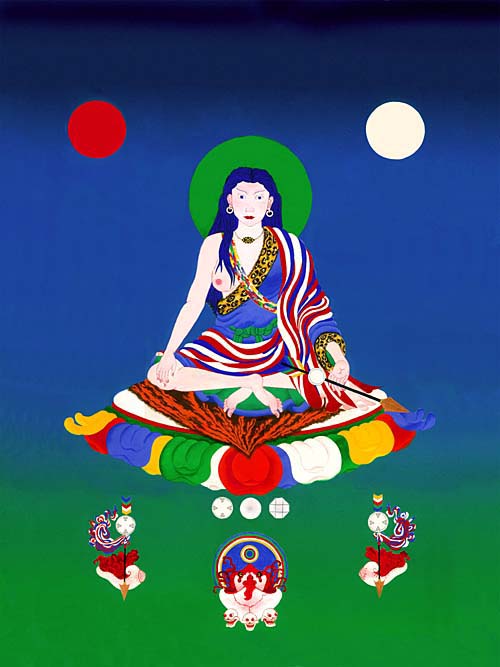 A-shé Tashi Pema Khandro (A shes bKra shis pad ma mKha’ ’gro, 1911-unknown) was the elder of the two sang-yums of Aro Yeshé (the younger sister was A-yé Khandro – A ye mKh’ ’gro). A-shé Khandro performed a motherly rôle to Aro Yeshé and her sister A-yé Khandro in the first years of her marriage – and Aro Yeshé relied upon her with regard to her insight into the disciples who belonged to the Aro Gar. When people needed personal advice of Aro Yeshé, A-shé Khandro was always there and would often speak for Aro Yeshé. Aro Yeshé would simply observe and exchange glances with A-shé Khandro for any resolution to be agreed upon. A-shé Khandro was master of the family histories of the major yogis and yoginis of the Aro Gar and could recite all their family trees and lineage trees by heart. She had been given many instructions and teachings by Aro Lingma – particularly concerning the dissemination of the Aro gTér and her rôle in supporting Aro Yeshé and A-yé Khandro. She was a master of long-life practices and it was her duty to guard the life of Aro Yeshé through practices of a special form of Yeshé Tsogyel which was a gong gTér of Jomo Chhi’mèd Pema.