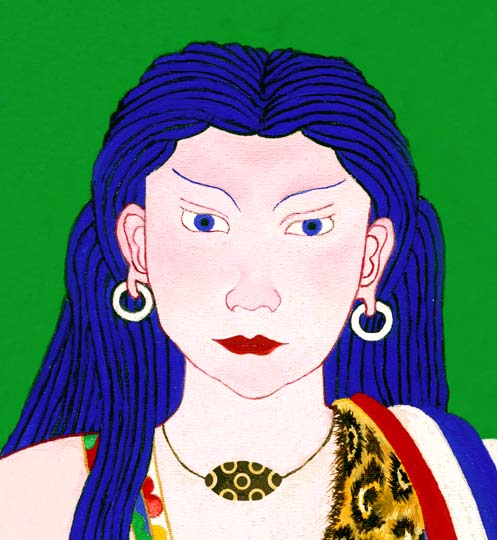 the wide open eyes of the Dzogchen yogini

The face of A-shé Khandro, like that of A-yé Khandro, and Khandro Shardröl Rinchen Wangmo, was a personal realisation which came out of Khandro Déchen’s intensive work over the course of several days.

Ngak’chang Rinpoche says of the lineage faces drawn by Khandro Déchen:
There are few references for women available in terms of examples of lineage Lama iconography, and so the creation of a face to represent a female lineage Lama is a matter of inspiration arising from meditation and dreams of clarity. This face is not merely a representation of the Lama in question but a portrayal which is close to the actual face of A-shé Khandro.

Khandro Déchen draws and redraws each face many times and the drawing is never finished until it comes alive. The moment when the face of a lineage Lamas comes alive has always been an experience of instantaneous recognition for Khandro Déchen and myself. Before that moment there may well have been a series of perfectly acceptable faces – and there is no reason why one of them could not have been chosen; apart from the fact that we had not found the right face of the yogi or yogini in question.

The wide open eyes are typical of the expression of a Dzogchen master and portray relaxed presence which is at once vast and infinitesimally subtle.