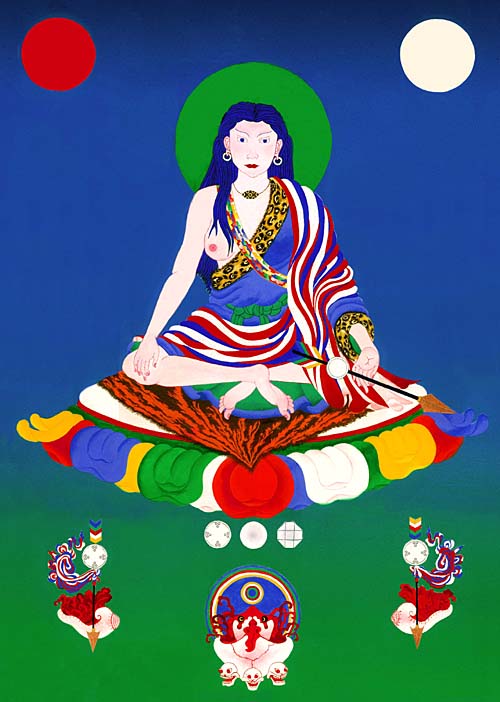 the blue gown of Dzogchen

A-shé Khandro wears the Dzogchen blue chuba or gown. It is trimmed with the pelt of a snow leopard – in the style favoured by the brigands of Golok and Kham, with one sleeve removed and tucked behind her back into her belt sash. A significant number of the practitioners of the Aro Gar wore leopard-trimmed robes due to the fact that many hailed from Golok and were members of the extended family clan of A-Kyong Düd’dül Dorje. The A-Kyong tribe was of ancient origin and many famous Lamas are connected with that tribe – including DoKhyentsé Yeshé Dorje.

In the warmer weather A-shé Khandro either went naked like her sister – or wore leopard skin skirts. She holds the da’dar (mDa’ dar – long-life arrow) in her left hand. The da–dar is a symbol of the central channel – and the mélong appended to it reflects the play of the thig-lés which manifest within the central channel. The mélong is also the primary symbol of Aro Lingma.