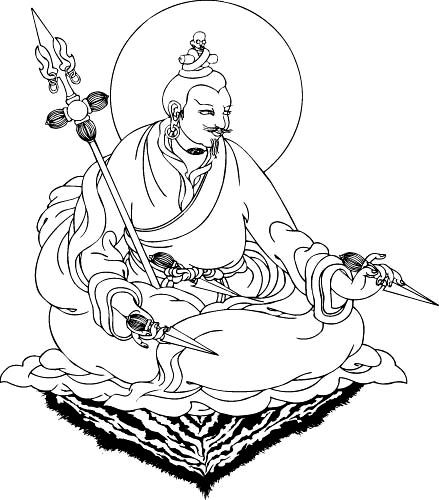 A-Kyong Düd’dül Dorje was a friend of ’a-Shul Pema Legden. He joined with Aro Lingma and ’a-Shul Lama on their way South from Khordong. He was a ngak’phang Lama connected with ’a-Shul Lama’s family clan. He was a cousin on ’a-Shul Lama’s mother’s side of the family – a son of ’a-Shul Lama’s maternal aunt called Nor’gyal Pema. A-Kyong Düd’dül Dorje was a Dorje Phurba master. He was extraordinarily skilled in making phurbas in metal and wood, (as well as bone, ivory, and other materials). Whilst living at the Aro gar he made over one hundred and eleven wooden phurbas with the assistance of the disciples of Aro Yeshé. He was known for his deftness in carving and for the perfection of the expression which he gave to the wrathful faces on the phurbas.

A-Kyong Düd’dül had the siddhi of long hair. In the style of the area from which he came, he wore his hair in a thor-tsug (thor gTsug – turban style top-knot). His family ngak’phang tradition was to wear a dark blue chuba with a green lining, but he also wore the red, white, and blue costume of the gö-kar-chang-lo’i-dé when engaged in formal practice. He held gö-kar-chang-lo ordination from several Lamas and maintained all the variations of these traditions according to the mode of his practice. In everyday life, he mainly wore iron earrings, and plain tok-chak iron rings on his fingers. He also wore a nine-eyed gZi, until he gave it to Aro Lingma as a present. Up until that time, Aro Lingma had worn a pebble around her neck on a leather thread. This pebble had been passed down to her by her mother Jomo Pema ’ö-Zér, who in turn had received it from Jomo Chhi’mèd Pema. From that point in time the custom of wearing a single gZi proliferated within the Aro Gar. Such gZis were empowered through the practice of Za Rahula as a means of holding disciples’ motivation to the practice. In the tradition of A-Kyong Düd’dül Dorje the wearing of a gZi on a golden chain around the neck represented the combined peaceful and wrathful yidam ornaments.

In return for the gift of the gZi, Aro Lingma incised ribbed markings on each of his rings with her thumbnail. It was A-Kyong who gave ’a-Shul Pema Legden his iron dorje and bell set, which was made by his uncle Ngakpa Rangdröl Takshar (self liberated white tiger) a black-smith ngakpa who specialised in making phurbas and incredibly fine iron work practice implements. It was said that he was an emanation of Pema Lingpa, but he personally denied this to all who asked him about it and maintained that he had been a goat in his previous life. Ngakpa Rangdröl Takshar was married to ’ö-Sel Nyima (a yogini who had profound experience of dark retreat). They had no children themselves but took special interest in young A-Kyong. It was Ngakpa Rangdröl Takshar who taught A-Kyong how to make phurbas, and a great deal of his childhood was spent in learning how to make them according to a variety of different gTérma traditions.

A-Kyong was known in the Gar for his vast knowledge of phurba and could make phurbas exactly to the specification of Dudjom gTér, Nying-thig, Chang-gTér and Lo-gTér. He also knew special phurbas of the Drukpa and Drigung Kagyüd gTérma cycles. He also knew a lot about Bön phurbas from their gTérma traditions. One of the great treasures of the Aro Gar was the phurba he made for Aro Yeshé after a dream of clarity in which he was shown the phurba of Thang-tong Gyalpo. This phurba was four feet long, and made of wood, iron, and bone. Two other important phurbas he made for Aro Yeshé were a human bone phurba of Dorje Tröllö and a tiger bone phurba of Tsogyel Tröllö.