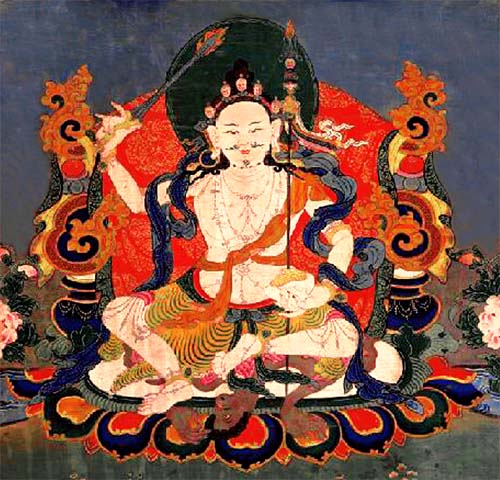 Traktung Pawo DoKhyentsé Yeshé Dorje (khrag ’thung dPa’ bo mDo mKhyen brTse ye shes rDo rJe, 1800-?) was the Mind incarnation of Jig’mèd Lingpa. Jig’mèd Lingpa was the incarnation of Longchen Rabjampa, who was known as one of ‘The three Manjushris of Tibet’ – along with Sakya Pandita and Jé Tsongkhapa. Being described in this way relates to their vast knowledge and prolific writings.

Khandro Déchen says of this thangka:
This is the reason why DoKhyentsé Yeshé Dorje’s iconographic form takes the appearance of Jampalyang (’jam dPal dByangs – Manjushri) – but in this thangka we see a wrathful manifestation of Jampalyang in which he holds a skull bowl rather than a text in his left hand. This is the Traktung (khrag ’thung – heruka) or wrathful manifestation of Jampalyang which exemplifies DoKhyentsé Yeshé Dorje’s style as a Wisdom-chaos master. The five skull crown which DoKhyentsé Yeshé Dorje wears and the khatvangha which he carries are also symbols of his wrathful qualities as a Lama. As a sign of mastery over all deluded appearances, he wears a tiger skin shamthab and sits upon the flayed hide of a demon. He wears the six human bone cemetery ornaments in display of his mastery of all six classes of Tantra – and sits upon a lotus throne replete with sun and moon discs which displays his capacity to lend his form as that of a yidam. His complexion is white, tinged with red – representing the mixing of the red and white bodhicittas, and describing him as being a fully enlightened being who has integrated the male and female aspects of his rTsa rLung.

DoKhyentsé Yeshé Dorje was born in Kong-sér Khado in the valley of Ma through which the Ma-chu river flows. His mother was of the Tséwang-men family of the Dawa Clan and his father was of the Chökhor family of the A-Kyong clan from Golok. (This is the same clan as that from which A-Kyong Düd’dül Dorje came.) His father was a ngakpa and his mother was a dakini with great visionary abilities which became more pronounced after DoKhyentsé Yeshé Dorje’s birth. Because of DoKhyentsé Yeshé Dorje’s importance as a lineage Lama of the Longchen Nying-thig, there was great pressure in certain circles for him to become a monk – but he consistently refused to take monastic ordination. Later, on the advice of Dodrüpchen Rinpoche, he took gö kar chang lo ordination for a period of time. The major part of his life was thereafter spent in lay clothing – mainly the sheepskin chuba style worn by the nomads amongst whom he lived. It is often the style of Lamas who practise mainly Dzogchen to adopt no form of specified religious appearance. This was the style of Khyungchen Aro Lingma