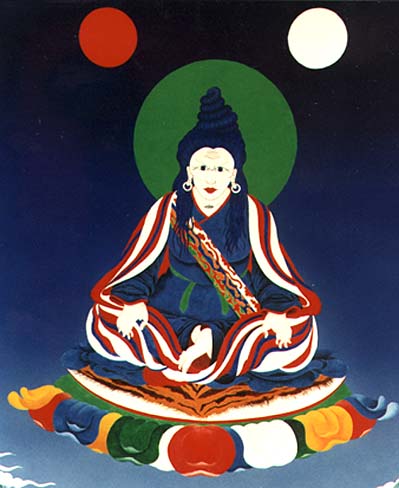 Aro Lingma’s mother, Jomo Pema ’ö-Zér, was brought up by Jomo Chhi’mèd Pema. Jomo Chhi’mèd Pema is depicted here as a powerful middle-aged woman reflecting the period of her life when she was the adoptive parent and Tsa-wa’i Lama of Jomo Pema ’ö-Zér. Jomo Chhi’mèd Pema was mainly regarded as an eccentric goat herder with powers of healing and weather prediction. In actuality, she was a realised yogini. a powerful Lama who could converse with the local Mountain Protectress and gave local people advice about farming in terms of the times to sew and reap. She gave people life advice but was not known as a teacher. Secretly, she was a Dzogchen Long-dé master whose disciples visited her at night to receive instructions.

She is shown here wearing the three-coloured brocade gomtag which she gave to Jomo Pema ’ö-Zér. Pema ’ö-Zér gave this gomtag to her daughter Khandro Yeshé Réma, who in turn gave it to her son Aro Yeshé. Jomo Chhi’mèd Pema never wore her gomtag unless she was teaching, and the same custom was maintained throughout the line of its inheritors down to Aro Yeshé.

Jomo Chhi’mèd Pema had a wealth of knowledge concerning rocks and stones and had her own medical gTérma which employed the diagnosis of cranial echoes produced by tapping certain special pebbles. She was a mysterious woman who appeared at a certain period in time and disappeared once she had raised Jomo Pema ’ö-Zér. Her parentage is not known, neither are the dates of her birth and death. Her lineage of teaching is not known, neither are her teachers known. When asked about her parentage or about her place of birth, she would either not answer, or simply point to the local mountain and laugh.