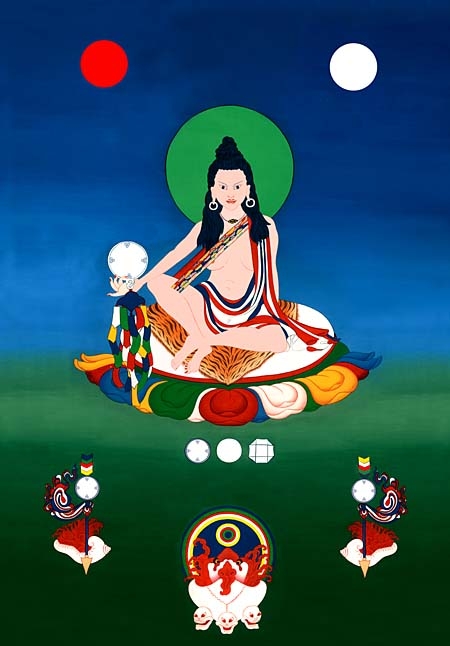 The Consummate Garuda who tastes the Primordial ‘A’

This thangka, painted in 1998, shows Khyungchen Aro Lingma in the most radiant manner of any thangka so far produced. Khyungchen Aro Lingma was born with great ease, without making any sound. The first act she performed was to execute a long drawn out hiss, with her lips drawn up into wrathful aspect. She then performed a rTsa-rLung breathing exercise. This fulfilled the name given for her by Jomo Chhi’mèd Pema. The name given was Khandro Yeshé Réma, and this name applies to the phase of her life before she received the gTérma from Yeshé Tsogyel.

A great number of eagles appeared in the sky at her birth. They swooped and glided very close to her parents’ retreat cave entrance. All manner of sky phenomena appeared at her birth, including clouds shaped like yung-drungs and ga-kyils. Strong gusts of wind sprang up and subsided very quickly. The sun and moon were clearly visible in the sky at the same time. Her mother remained in a state of vision through the birth, in which she was physically assisted by her sang-yab Rang-rig Togden.

Aro Lingma slept a great deal as a child but always with her eyes wide open. It was not always easy to tell whether she was asleep or awake because often she would sleep sitting up without any support. She did not speak until she was five years old but then spoke fluently and without effort. Up until that point she simply listened to her mother and father practising or giving her instruction on practice. She was brought up entirely in retreat and never saw another child until she was an adult woman.

As a young girl, she would wander widely, in the mountains around her parents’ meditation cave. She would disappear whenever patrons came to visit and bring food and offerings to the couple. She expressly did not want anyone to see her apart from her parents, and they were happy to go along with her in this wish – particularly because it accorded with the predictions which Jomo Chhi’mèd Pema had made concerning their daughter. They never questioned anything that she did or wanted. She wanted very little and was mostly quiet apart from peals of loud and unexpected laughter.

She would sometimes be gone for several days and come back with accounts of having visited other realms and of having met Yeshé Tsogyel and Padmasambhava. Her parents instructed her in Trül-khor Naljor (Yantra yoga) from a very early age and she had mastered gTu-mo by the age of nine. She could not endure to wear clothes for most of the year until she was an adult and left the retreat cave. The name Réma, or cotton-wearing lady, predicted for her by Jomo Chhi’mèd Pema, related to the fact that she would find it easy to generate her own inner heat.