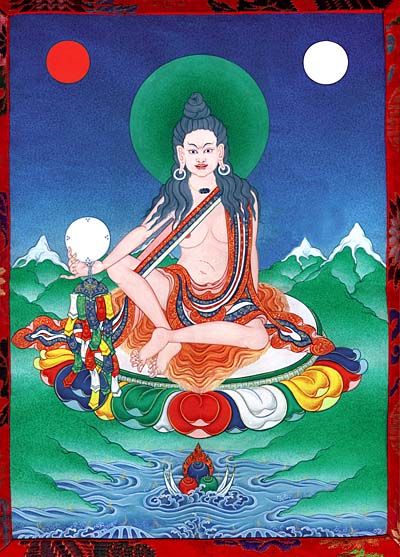 Aro Lingma (1886-1923) was born in the fire-dog year in Mar-Kham – the southern region of Kham in Eastern Tibet. She was named Yeshé Zértsal by her parents – Jomo Pema ’ö-Zér and Rang-rig Togden. Khyungchen Aro Lingma was the name she received from Yeshé Tsogyel as an aspect of the gTérma she received in pure vision in her early twenties.

She was born with great ease and without making a sound. Her first act was to make a long drawn out hiss with her lips drawn up into wrathful aspect, as if she were performing a rTsa-lung breathing exercise. Eagles appeared in the sky at her birth – swooping and gliding close to her parents’ retreat cave entrance. Sky phenomena also appeared at her birth – clouds like yung-drungs and ga’khyils. Strong gusts of wind sprang up and subsided rapidly, and the sun and moon were visible in the sky at the same time. Her mother, Jomo Pema ’ö-Zér, remained in a state of vision through the birth, in which she was physically assisted by Rang-rig Togden.

Aro Lingma slept a great deal as a child but always with her eyes wide open. She did not speak until she was five years old but then spoke fluently. As a young girl, she would wander widely in the mountains around her parents’ meditation cave. She would disappear whenever patrons came to visit. She would sometimes be gone for several days and come back with accounts of having visited other realms and of having met Yeshé Tsogyel and Padmasambhava. Her parents instructed her in trülkhor naljor (yantra yoga) from a very early age and she had mastered gTu-mo by the age of nine – when her parents called her Yeshé Réma. In the earlier part of her life she was called Jétsunma Khandro Yeshé Réma by Akyong Düd’dül Dorje Rinpoche and the disciples who gathered around her.

Aro Lingma was about sixteen or seventeen years old when her parents took rainbow-body (’ja’lus) together. She sewed them into a white tent together after receiving final advice, instructions, and predictions from them. This event had a profound impact on Aro Lingma and ripened many latent faculties. She gathered the relics of her parents and set out toward Northern Kham and Golok, where her mother had predicted she would find a suitable sang-yab (spiritual consort) for the realisation of a gTérma cycle that would come into existence in the future for the benefit of beings.

Aro Lingma travelled from place to place practising and living as a wandering yogini. She had the opportunity on several occasions to join up with other groups of practitioners but was intent on travelling alone. She sometimes pretended to be dumb, in order to avoid speaking with people – especially if they were religious people. She would always speak to children and ordinary people – especially if they appeared to have difficulties; but she avoided religious people whenever she could.

It took Aro Lingma about a year to reach Northern Kham and Golok where it was predicted that she would meet her sang-yab. It was there that she met ’a-Shul Pema Legden, who was a monk and a disciple of Khalden Lingpa. She recognised ’a-Shul Pema Legden immediately as having the potential to realise vision, and they travelled together to Southern Tibet. ’a-Shul Pema Legden gave up his monk’s vows and became Aro Lingma’s sang-yab. During their journey to Southern Tibet, Aro Lingma experienced several profound visionary experiences of Yeshé Tsogyel in which she realised the cycles of teachings and practice that her mother had predicted. These cycles of teachings and practice came to be known as the Aro gTér – the teaching of the Mother Essence Lineage. These teachings survive today as an essential and ‘extremely non-elaborate’ body of teachings and practice.

Aro Lingma was a pure-vision gTértön, a discoverer of spiritual treasures. She received several cycles of practice directly from Yeshé Tsogyel, the female Buddha and consort of Padmasambhava. These practices were unique and extraordinary, as they consisted of awareness-being (meditational deity) forms which were all manifestations of Padmasambhava and Yeshé Tsogyel. Together with these practices were methods of the three series of Dzogchen and their ancillary psycho-physical practices. Aro Lingma was advised by her mother to practise these in secret, and only to teach the practices to her daughter. It would then be her daughter who would transmit these teachings to the world.

Unfortunately, due to inauspicious circumstances, Aro Lingma gave birth to a son, and the blood-line was broken. Her sang-yab died, and she never took another consort. Her mother had advised that she should only have one sang-yab. She also advised that she should only have one child; otherwise her life would be considerably shortened, and she would thus have little time to make sure of her daughter’s spiritual training.

Her sang-yab, ’a-Shul Pema Legden, was an old Lama. He died whilst Aro Lingma was still quite young, and before she had conceived a daughter. This could have meant that Aro Lingma’s cycles of gTérma would have disappeared from the world, but through her yogic power she was able to conceive shortly before ’a-Shul Pema Legden’s death. She guided him through the Bardo visions of the intermediate state between lives, and gave birth to him as her own son – Aro Yeshé. It was not possible for ’a-Shul Pema Legden to be reborn as a woman due to his own remaining karmic obscurations, and so the opportunity was lost in terms of these teachings being made widely known. Aro Lingma’s mother had given her advice about the inauspicious advent of giving birth to a son, and as a result of maintaining these instructions exactly, she was able to pass the teaching on to her son by appearing to him in visionary form after taking rainbow body whilst Aro Yeshé was in solitary retreat at the age of eight.