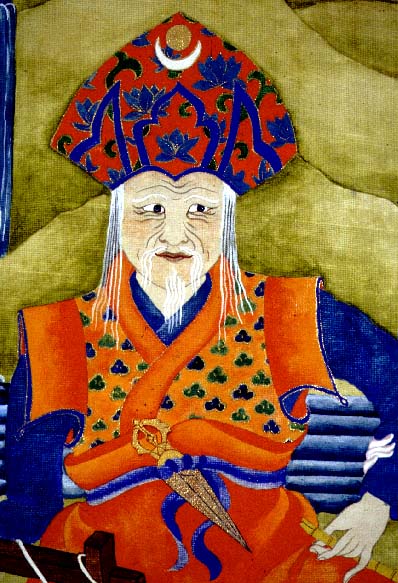 ’a-Shul Pema Legden was the gTér scribe and visionary artist of Khalden Lingpa. He was recognised by A-Kyong Düd’dül Dorje Rinpoche as the rebirth of a daughter of the Sixth Dala’i Lama. He was not known as a great Lama, or as an intellectually gifted practitioner – he simply worked hard, and was devoted to Khalden Lingpa. He was a meticulous artist and scribe, and a kind, gentle person. He was a monk, but had been instructed by Khalden Lingpa not to cut his hair. (This was not an uncommon practice on completing a long retreat. The hair of monks and nuns of all schools is traditionally left uncut whilst in retreat.)

The splendid waistcoat in which he is depicted was given to him by Khalden Lingpa. It was yak wool, decorated with a marvellous brocade with red and green clouds. The iron dorje, bell, and phurba shown in the thangka were made and given to him by his friend Ngak’chang A-Kyong Düd’dül Dorje Rinpoche – a strong practitioner of Dorje Phurba (as was ’a-Shul Lama).

Aro Lingma took ’a-Shul as her consort and disciple, and travelled with him to the border lands near Nepal, where they established the Aro Gar.