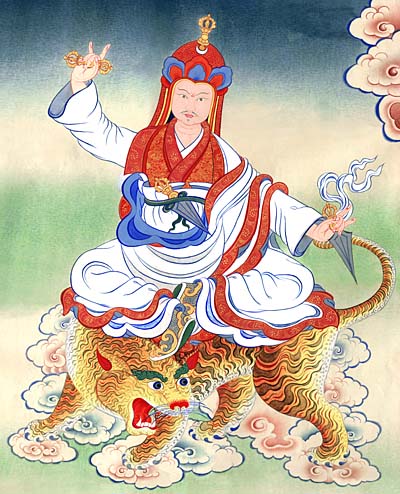 the energy of Dorje Tröllö

Nuden Dorje Dro’phang Lingpa Tröllö-tsal is one of the gTértöns of the Nyingma School. Although the gTértöns are becoming better known in the West at this point in history, there are still a significant number of whom many are unaware.

Khandro Déchen comments:
This image is unusual inasmuch as it portrays a Lama in visionary form. Here Nuden Dorje Dro’phang Lingpa Tröllö-tsal sits upon a tiger to display the fact that he is an emanation of Dorje Tröllö. One of the few other examples of Lamas riding tigers is that of Jomo Pema ’ö-Zér, who is an incarnation of Tashi Chhi’drèn – the disciple of Padmasambhava and Yeshé Tsogyel, who manifested as the tiger upon whom Dorje Tröllö rode. The tiger’s paws are grounded on clouds to give the impression of flight. It is said that Dorje Tröllö is shown riding a tiger for several reasons – one being, that he subdued the sky-tiger devil and oath-bound her as a protector of Vajrayana.

Ngak’chang Rinpoche comments:
It is important that the idea of subjugation in Buddhism is understood. Usually subjugation renders ‘the subjugated’ powerless and humiliated – but here we have an entirely different possibility. Padmasambhava’s subjugation equates with freedom and honour – the subjugated demons become protectors of the tradition and are able to manifest their previous powers for the benefit of practitioners by whom they are supplicated. With regard to our experience of the path, we can see our own demonism and demonolatry in a similar way.

Through the practice of and devotion toward Padmasambhava and Yeshé Tsogyel our neuroses and dualistic derangements are transformed into the living colour of the lineage. We too, each in his or her own way, can become protectors of the lineage. This is vital in the West today where new age and psychotherapeutic corruption of Buddhism has become so rampant.