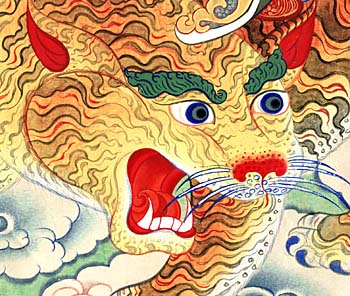 the mount of Dorje Tröllö

Ngak’chang Rinpoche comments:
The tiger is the symbol of unrestrained ferocity. The lion has the power of strength and dignity – but the tiger exhibits wildness rather than dignity. One could call this kind of wildness ‘the natural dignity of unassuming arrogance’. This is a strange assemblage of words – but the tiger is not easily explained. Regal qualities are ascribed to the lion, and the lion in question is usually depicted as male. The tiger, however, is invariably female, and her power carries the terror of the unknown and unknowable. The tiger is ruthlessly playful and playfully ruthless – she is the ground of Wisdom-chaos.