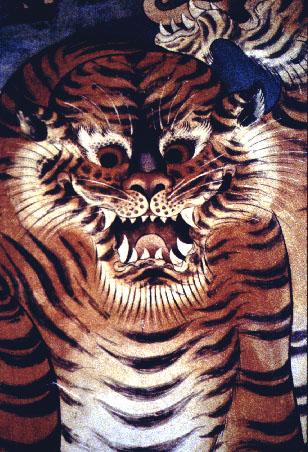 one of the four protector animals of Tibet

The four protector animals of Tibet are: lion – seng-gé (seng ge), tiger - tak (sTak), dragon – druk (’brug), and garuda - khyung (khyung). The tiger is associated with the visionary power of the yidam, so every yidam wears a tiger-skin skirt. The tiger is also found within the sKu-mNyé series of psycho-physical exercises, where it is one of a group of five animals associated with the five elements: lion (earth), vulture (water), tiger (fire), eagle (air), and garuda (space). When Dorje Tröllö (the most wrathful of the Eight Manifestations of Padmakara) rides a tigress, she is the manifestation of his consort Tashi Chhi’drèn. The sky-tiger was also a pre-existing Bön yidam.