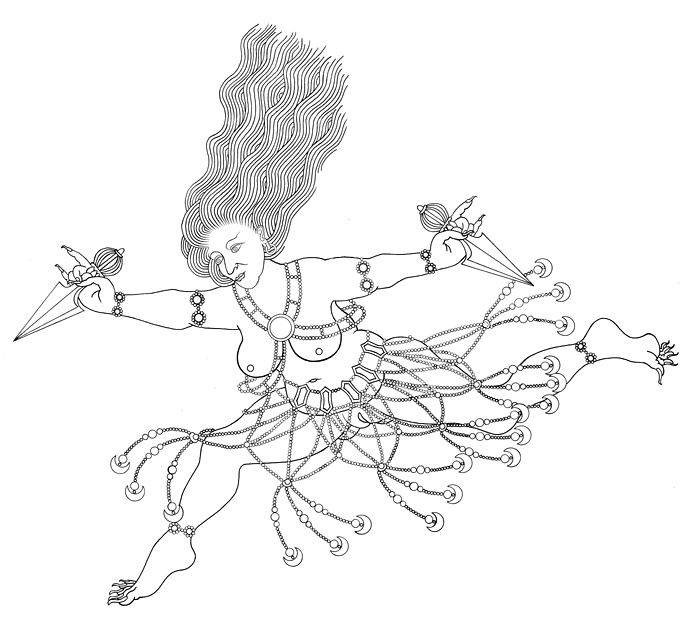 Mönmo Tashi Chhi’drèn (mon mo bKra shis khyi ’dren) was born in the region of Mön, on the Nepalese border at a place called Mön Tsa’og. She was one of the 25 female disciples of Padmasambhava of which a text exists in the lineage of Rig’dzin Trakngak Lingpa. This line drawing is the work of Métsal Rig’dzin Pamo – one of the thangka painting students of Khandro Déchen. Under the direction of Khandro Déchen and Ngak’chang Rinpoche, Métsal is producing images of the 25 female disciples based on the siddhis they displayed. These will ultimately form the illustrations for a book on the female siddhas of Tibet.

In this drawing Tashi Chhi’drèn is shown descending like a thunderbolt from the skies – wielding two phurbas. She wears the ru rGyan—human bone cemetery ornaments—and her fingers and toes are adorned with wrathful nails. Her flying here indicates her speed as she swoops upon her prey – the vow breakers who attempt to destroy the lineages of Dharma. When this line drawing becomes a painting, Tashi Chhi’drèn will be surrounded by tiger shaped clouds.

Tashi Chhi’drèn had spontaneous visions and memories of previous lives. She was first given empowerment and transmission by Yeshé Tsogyel, who then brought her to meet Padmasambhava who took her as one of his major consorts in the practice of the Buddha-karma of destruction. Tashi Chhi’drèn became a master of fierce practices who gained complete siddhis.