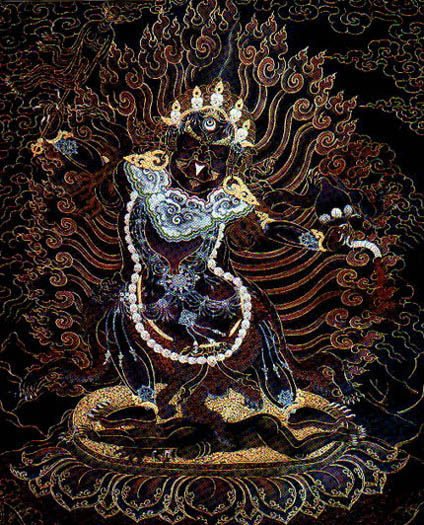 Mamo Ekajati – Ngak-srung Ral gÇigma (sNgags srung ral gCig ma) the Single Braided Mother or ‘Non-dual Queen’ is the most important protector – according to every lineage of the Nyingma tradition. She is also known as Pal-ngak kyi Srungma (dPal sNgags kyi srung ma) – the ‘Splendorous Protectress of Secret Awareness-spell’.

Khandro Déchen comments:
This powerful thangka is painted in the style of ‘nak-thang’. This means that it is painted on a black ground – a style which is reserved for the most wrathful Tantric ‘awareness imagery’. The portrayal is all the more striking, because Ekajati is correctly proportioned in terms of her stance. Often Ekajati is shown in a form which is too thin and tall, and the power of her stance is thereby lost. In the Aro gTér there is a yidam form of Yeshé Tsogyel manifesting as Ekajati in which she is slim and taller according to dakini proportion, but her stance is also different. The cemetery ornaments in this thangka are beautifully portrayed in great detail – showing the chö-khors at the wrists, ankles, and chest. This form of ru-gyan is rarely seen today.