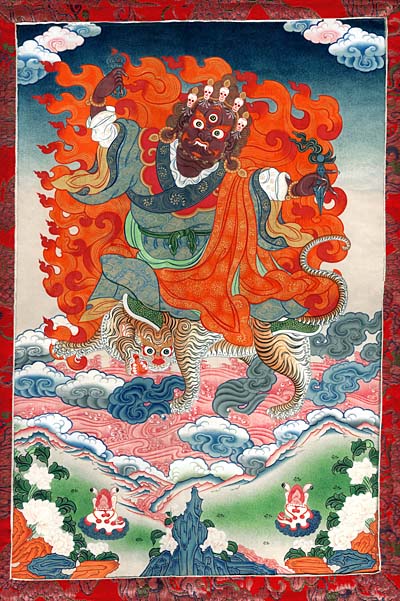 This vivid image of Dorje Tröllö (Ba Dzra Gu ru rDo rJe Gro lod) is unusual for various reasons. It is a rare image because it comes from the Khordong Cycle of gTérma which is held by Zilngön Lingpa. The main difference between the Khordong gTér Dorje Tröllö and the more commonly known form is that he is facing directly forward rather than staring to the left*. Another difference (which is shared with the Aro gTér form) is the five-skull crown.

Khandro Déchen comments:
Strangely, this form does not show the ivory archer‘s ring on the thumb of the left hand, and neither does Dorje Tröllö wear the ru rGyan (human bone cemetery ornaments). In common with the Aro gTér form, he does not wear the garland of 52 severed heads. In this presentation he wears golden earrings rather than conch earrings, and also wears golden wrist ornaments. This seems to be an unusually simplified version of the Khordong Tröllö, because the phurba is shown in a ‘minimalist’ gTérma form and there is no scorpion emanating from the phurba. Whether there is a specific purpose in these omissions is unclear, as is the reason for his white shirt. This is a beautifully painted thangka with great attention given to the tiger and to the ocean of blood over which Dorje Tröllö rides. In the many Nyingma gTérma traditions there exist many different forms of the yidams. The enormous richness of these many manifestations give a spectacular sense of the potential available to the Vajrayana yogi or yogini.