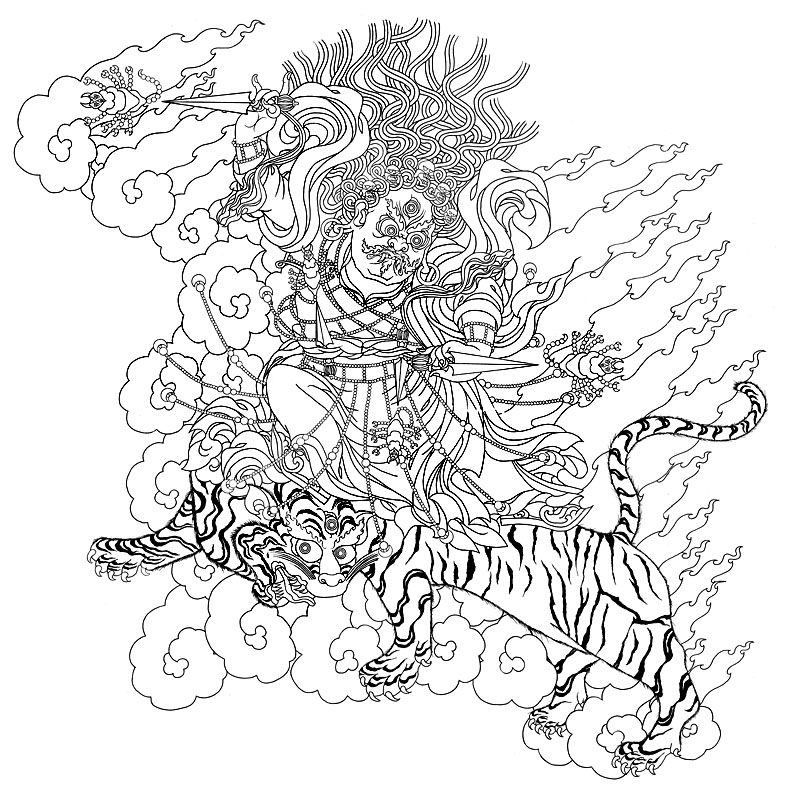 Dorje Tröllö is the Wisdom-chaos manifestation of Padmasambhava – the Second Buddha. Wisdom-chaos (yeshé ’cholwa – ye shes ’chol ba) is the style of non-dual activity, which cuts through dualistic manipulations in their most subtle forms.

Ngak’chang Rinpoche comments: When self-oriented spiritual conceit attempts to appropriate spiritual involvement as part of its manipulative strategy, the yeshé ’cholwa Lama encourages the disciple to increase the volume of his or her neurosis until it implodes. The yeshé ’cholwa Lama often destroys conventional spiritual reference points in order to move the disciple beyond fixed habit patterns. The tigress displays unrestrained ferocity. The tigress purveys the terror of the unknown and unknowable. She is ruthlessly playful and playfully ruthless – she is the ground experience of yeshé ’cholwa. Yeshé ’cholwa is not easily understood in the West even by those who espouse Vajrayana Buddhism. There are few people who are actually open to forgoing emotional anæsthetic in respect of the advice and guidance of a Lama. There is often great interest in Dorje Tröllö and yeshé ’cholwa – but the pragmatics of ‘wisdom gone wild’ often offend the aspect of narcissism which likes to hide behind logic and mundane reasonability. As long as the Lama is subject to the tyranny of logical analysis and coherent accountability – yeshé cholwa is non-functional.