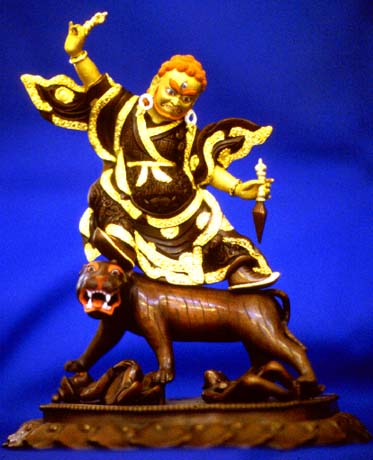 This statue shows Padmasambhava as Vajra Guru Dorje Tröllö (rDo rJe dro lod – indestructible wrath). Chögyam Trungpa Rinpoche described this particular form as ‘trampling on the prostrate forms of ecclesiastical dignitaries’ and this can be seen here in the style of hat worn by the anthropomorphic embodiment of delusion below the front feet of the tiger on whose back Dorje Tröllö rides.

Dorje Tröllö is the Yeshé Cholwa (ye shes ’chol ba – Wisdom-chaos) manifestation of Padmasambhava. He is one of the famous ‘Eight Guises of the Vajra Guru’. This beautifully crafted and gilded statue belongs to Lama Tharchin Rinpoche – the Lineage-holder of the Repkong.