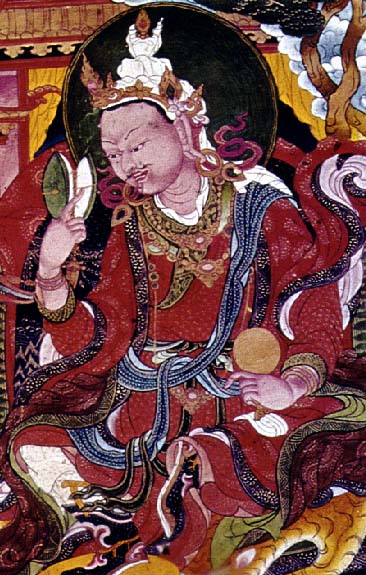 The Eight Names of Padmakara: ‘The Lotus Prince’ manifestation

Pema Gyalpo (bLa ma pad ma rGyal po) is the ‘Lotus Prince’ – the youthful manifestation who appears spontaneously born; just as enlightenment is spontaneously born. When enlightenment is born – everything is overturned. Enlightenment is the chaos which undermines the careful plans of an ordered society. Conventional religion always has ideas about how enlightenment has to behave, and because of this Pema Gyalpo exhibits the ‘realised misbehavior’ which makes it impossible to falsely integrate enlightenment into the pre-set pattern which would distort the non-dual state from the start. Pema Gyalpo has to be cast out of the Kingdom because he murders duality in the form of a ‘mother and her child’. The mother and child are emptiness and form and they are ‘murdered’ or united when they are struck by Pema Gyalpo’s khatvangha. The realised statement of Pema Gyalpo’s manifestation is that we cannot welcome enlightenment into our dualistically ordered structures without destroying those structures. Pema Gyalpo causes chaos in the same way as a young child causes chaos in the stifling neatness of the ‘ideal home’ of dualism.