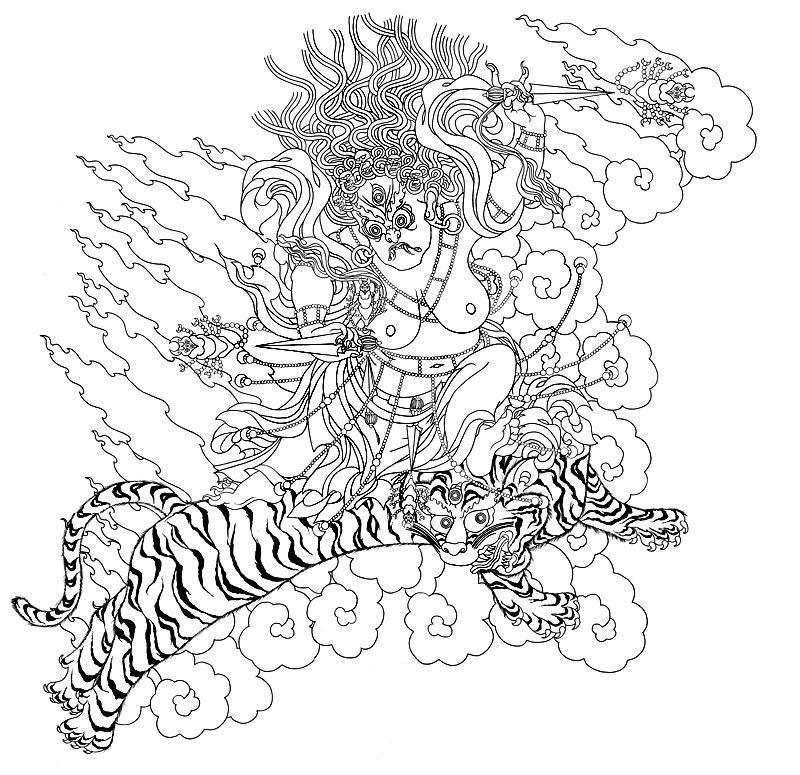 Ngak’chang Rinpoche comments:
During the period after Padmasambhava left Tibet, Yeshé Tsogyel manifested in eight guises which reflected the Guru Tsèn-gyèd (gu ru sPrul mTshan brGyad) – eight emanated aspects of the Vajra Master: Pema Gyalpo, Pema Jungné, Shakya Seng-gé, Loden Chogsé, Nyima ’ö-Zer, Tsokyé Dorje, Seng-gé Dradrok, and Dorje Tröllö (pad ma rGyal po, pad ma ’byung gNas, sha kya seng ge, bLo lDan mChog sred, nyi ma ’od zer, mTsho sKyes, seng ge sGra grogs, and rDo rJe gro lod). Of these manifestations, Tsogyel Tröllö is the most wrathful. Within the Aro gTér there exists a unique form of Dorje Tröllö and Tsogyel Tröllö in union called the Blazing Green Copper Razor Devils – a practice which combines every aspect of phurba. This practice was the central method of A-kyong Düd’dül Dorje, who was the Phurba Master of the Aro Gar and who had collected many phurba practises from a wide variety of Nyingma and Kagyüd lineages. Khyungchen Aro Lingma gave him transmission into the practice as the combination of all the phurba practices he possessed and through this means he became ‘indivisible from phurbom pquo: so that his every action impaled the three distorted tendencies of attraction, aversion, and indifference.

Khandro Déchen says of Tsogyel Tröllö:
She is the mistress of Wisdom-chaos – yeshé ’cholwa. Yeshé ’cholwa (ye shes ’chol ba) according to Chögyam Trungpa Rinpoche’s translation is ‘wisdom gone wild’. She is the Inflammable holder of the three terrible oaths:

What ever happens; may it happen.
Whichever way it goes; may it go that way.
There is no purpose.

She wears the wrathful circlet of five skulls which transforms neurotic emotions into the spectrum of the five wisdoms and directly liberates degraded elements into the self-play of the space of existence.

Her startling complexion is the colour of blood irradiated by the devastating dynamism of her animatedly adamant compassion – the wild wisdom fire of her utter integration with non-dual reality – the immeasurable non-dual fury toward impediments of compassion. She gnashes her lower lip in obvious irritation beyond subject and object. Her razor incisors shear through the illusion that form and emptiness are divisible. She wears the fluttering Vajrayana skirt of the gö kar chang-lo’i dé (gos dKar lCang lo’i sDe), made from ‘the lepers’ rags of primordial purity’. She wears the ru rGyan, the six human bone cemetery ornaments which display my exuberant habitation of the charnel ground. She wears conch yogini’s earrings – the white spirals of Dharmata.

Ngak’chang Rinpoche describes her phurbas as follows:
She holds a nine-pronged coral phurba in her right hand – pointing rightward and annihilating eternalism. On the thumb of her left hand she wears the ivory ring which maliciously disciplines the eight classes or protectors, compelling them to support yogis and yoginis in the fulfillment of damtsig. She holds a nine-pronged conch phurba in her left hand – pointing leftward and annihilating nihilism. She wears two nine-pronged phurbas in the sash which binds her shamthab. The meteorite iron phurba indicates the zenith and annihilates monism, and the human bone phurba points toward the nadir and annihilates dualism. These three-bladed devil-destroying empty daggers pierce the heart of attraction, aversion, and indifference according to the neurotic manipulations of the four extremes. From each phurba, black inferno scorpions fracture forth to exterminate the four devils of dualism. Her right leg is extended outward in token of courageous kindness, unrelenting aptitude, and perfect power to enter suddenly into victory for the advantage of everyone and everything everywhere.