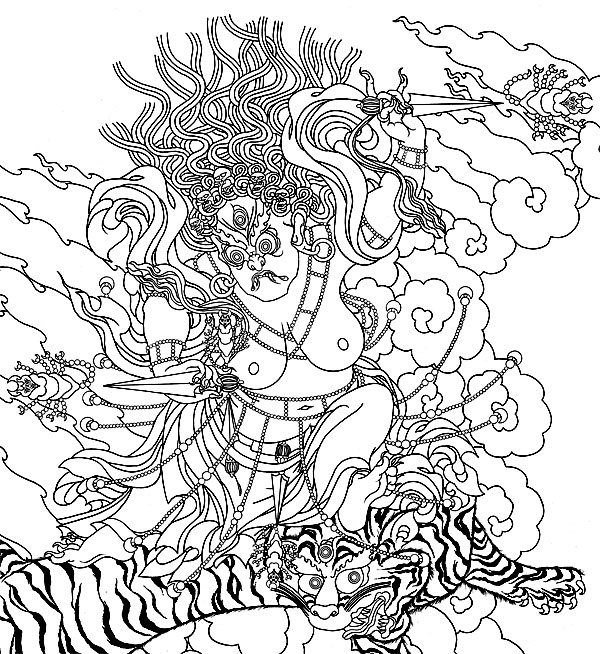 This detail from the line drawing by Khandro Déchen shows many aspects of the symbolism of Vajra Mamo Tsogyel Tröllö (tshog rGyal gro lod) Yeshé Tsogyel manifesting as Dorje Tröllö.

In general, her appearance displays many aspects of ‘trak-tung’ (blood drinker) appearance, the display of the wrathful awareness beings who partake of the hot blood of kindness. The wrathful yidams display what Ngak’chang Rinpoche calls a direct, energetic approach to transforming our neuroses, overpowering the mechanism of maintaining samsara through the strategy of aversion. They manifest the Buddha-karma (Tib: thrin-le, sprin las) of destruction.

The trak-tungs display large, powerful physiques, haloes of flame and smoke, and are often ornamented with human bones and weapons; Vajra Mamo Tsogyel Tröllö’s form is dark maroon, the color of dried blood. Her white ngak’phang skirt (zen) is made from the shroud of a leper. The trak-tungs manifest the view that even the most negative circumstances and obscurations are still only distortions of the enlightened state, and that no state is inherently beyond redemption. They utilize the energy of negativity itself to transform distorted states into their liberated quality; this is reflected in their wildly energetic poses and flying robes, flaming hair, and wrathful ornaments. Ngak’chang Rinpoche and Khandro Déchen remark that her skirt ‘represents the clear light of the primordially pure condition, and defines her as one who is no longer subject to the pallid, puritanical spiritual timidity of those who live in fear of their own innately pure energy.’

The tiger upon which Vajra Mamo Tsogyel Tröllö rides represents Padmasambhava, her secret inner method nature. In their envisionment commentary for the practice of this yidam, Ngak’chang Rinpoche and Khandro Déchen write:
I am carried like a hurricane through the space of existence and non-existence on the immeasurable tiger of spacious passion. The tiger who is pervaded by spacious passion is none other than my own secret method nature. He is Padmasambhava, the origin of Tantra. He overpowers all phenomena with empty method, and his roar devastates the fabric of all dualistic contrivances. I stand astride his back in the stance of unbridled vajra arrogance in display of the natural state in which everything relaxes into the condition of primal purity.

Like the Aro gTér Dorje Tröllö, Vajra Mamo Tsogyel Tröllö rides a tiger which is larger than the usual mount, because he is present as her powerful sang-yab Padmasambhava, and therefore shown in dynamic upward leaping form. The tiger possesses a wisdom eye on his forehead in display of the fact that he is also a yidam. This is a characteristic of the Aro gTér, and the third wisdom eye can be found on every animal which acts as a mount for the primary yidam.