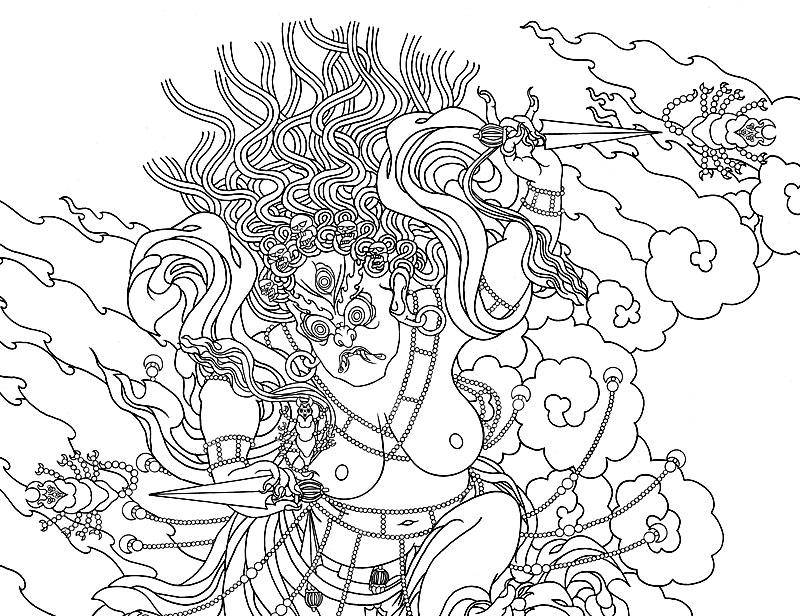 In this detail, we can make out Vajra Mamo Tsogyel Tröllö’s (tshog rGyal gro lod) skull crown, her halo of smoke & flame, and the bone bead ornaments she wears. ‘Vajra Mamo Tsogyel Tröllö’ means literally ‘The indestructible demoness, queen of the ocean (of wisdom) with the loose-hanging belly.’ She is the wisdom-display counterpart to the male, method-display Dorje Tröllö (rDo rJe bLo dPon rDo rJe Gro lod).

Here we can see her four phurbas, the three-sided ‘daggers of emptiness;’ that stab in one stroke the root of attraction, aversion, and indifference, which are the three distorted dualistic tendencies that are the engine of samsara. The phurbas each point in one of the cardinal directions, and each takes aim at one of the ‘Four Denials’ or ‘Four Philosophical Extremes,’ which are denied by Buddhism as complete descriptions of existence.

In her right hand, a coral phurba points toward the right, and destroys the philosophical extreme of eternalism, which maintains that all circumstance unfolds according to an unchangeable plan or design. Eternalism is thus a distorted view in which form reigns supreme, denying the emptiness of the possibility of change or chance.

In her left hand, a conch shell phurba points to the left and destroys nihilism, which distorts non-dual reality by maintaining that all actions are empty of meaningful value.

In her sash, a meteorite iron phurba points up to the zenith; it destroys monism, which distorts non-duality by asserting that ‘everything is one;’ in denial of apparent distinctions and compassionate connections.

Also in her sash, pointing down to the nadir, a human bone phurba destroys dualism, which denies non-duality by declaring that emptiness and form are divided.

In the Aro gTér style, each of the phurbas are of the ‘tse-gu’ form, with nine prongs on their vajra handles. The nine prongs represent the nine yanas (Tib: thegpa) or vehicles to liberation. From the tip of each phurba appears a black scorpion (Tib: digpa ratsa, bsDigs pa ra tsa). In Vajrayana symbolism the scorpion is regarded as representing that which is most negative. Ngak’chang Rinpoche and Khandro Déchen write in the envisionment commentary of Vajra Mamo Tsogyel Tröllö:
The total darkness emitted by the scorpions sucks out all sense of possibility and every last vestige of hope from attempts to maintain the philosophical extremes. In the miasma of vajra darkness that is spawned, monism, dualism, nihilism, and eternalism wither like weeds in the barren winter soil of an eternal night.