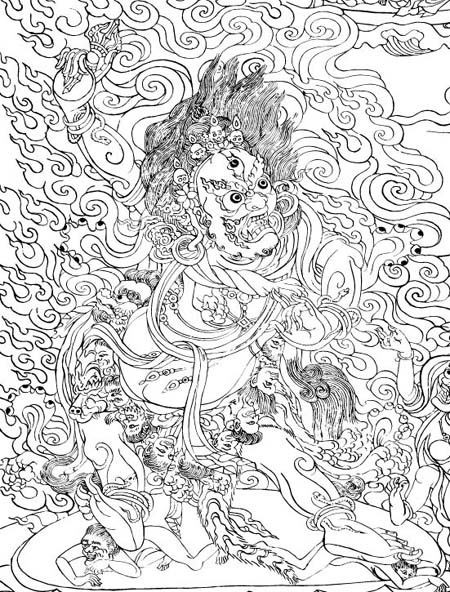 The Lama with the Lion’s Voice

In his manifestation as Seng-gé Dradog, Guru Rinpoche vanquished the 500 followers of the four philosophical extremes – through creating an earth quake which simply swallowed them up. This dramatic gesture is an example of the ‘wrathful compassion’ which goes beyond temporary expediency. Ngak’chang Rinpoche says of this:
The meaning of the earthquake relates with shattering the ground of delusion. This has nothing to do with harming people, or with taking issue with the status of others in terms of realisation or lineage. Here we are simply addressing the distortion of view. Seng-gé Dradog causes the earth to crumble beneath the feet of monism, dualism, nihilism, and eternalism. Seng-gé Dradog reverses the foul speech of those who use Dharma as a weapon to injure others. The energy of lies, deceit, and corrupt speech are turned back on themselves. Seng-gé Dradog destroys the language of the dualistically corrupt by removing the ground of its existence. This could be seen to be harsh, but it actually arises from the most searing compassion – as the mode of obliteration is related with speech – rather than body or mind. When the tantrika finds him or herself confronted by religious sectarianism, bigotry, and gossip – then the inspiration of Seng-gé Dradog comes to the fore like an earthquake.