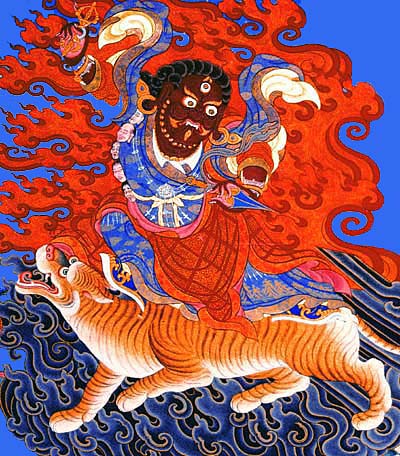 Khandro Déchen says of this thangka:
This portrayal of Dorje Tröllö emphasises the manifestation of Guru Rinpoche as tantric yogi – wearing predominantly red, white, and blue, the colours of the spatial channels of the rTsa rLung system. Here he wears ‘royal earrings’ rather than the conch shell earrings with which he is usually depicted. His phurba handle and vajra are also golden rather than meteorite iron, which indicates that although this form of Dorje Tröllö is similar to the Düd’jom gTér manifestation, it must originate from a different gTérma. He also wears golden wrist bracelets as well as the human bone ornament wristlets. In all likelihood, this style conforms to the sense in which Guru Rinpoche wears royal robes as well as the robes of the nine yanas – in token of his rôle as teacher of the King of Tibet – Chögyal Trisong Détsen.