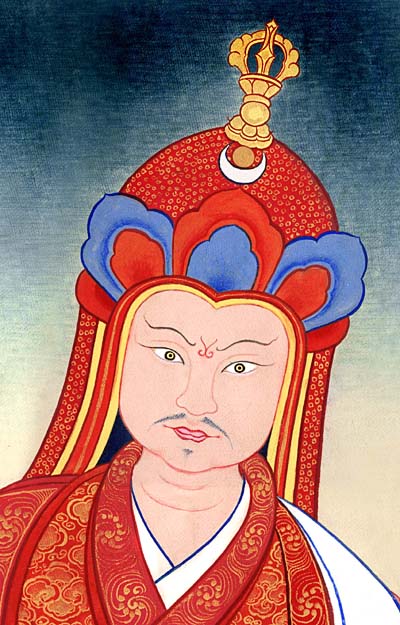 The Ögyen Pèd-zha worn by Nuden Dorje Dro’phang Lingpa Tröllö-tsal, is particular to his lineage of Khordong. Every lineage holder of the Nyingma tradition wears an Ögyen Pèd-zha, but each is in some way different according to the particular lineage.

The hat of the Khordong gTér lineage has five lobes which represent the Five Buddha Families. The actual hat, which still exists in Khordong today, is emblazoned on each lobe of the crown with a vajra of the colour appropriate to the Buddha Family it represents. This hat, like most other versions of the Ögyen Pèd-zha, is ornamented by the sun and moon and surmounted by a golden vajra. The sun and moon symbolise the wisdom and method aspect of Vajrayana and the golden vajra symbolises the rôle of the vajra master.

Ngak’chang Rinpoche comments:
Those who knew Chhi’mèd Rig’dzin Rinpoche when he was young, or who have seen photographs of him from the 1960s, will attest to the fact that this thangka bears a striking similarity to him. Maybe those with sufficient devotion also see this many years later. Chhi’mèd Rig’dzin Rinpoche’s eyes are certainly the same as they have ever been as long as I have known him, and this iconographic portrait of the first Nuden Dorje Dro’phang Lingpa Tröllö-tsal testifies to the realised rigour of his line as ‘power undiminished’ – the actual meaning of ‘Nuden Dorje’.