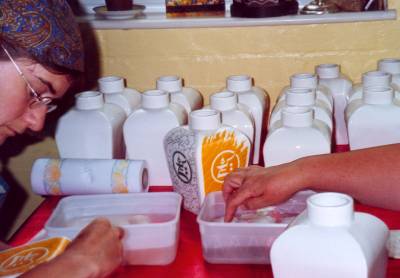 The final part of the creation of the gTérbum was the decoration. It took a long time and many hours of work in close consultation with Ngak’chang Rinpoche, for Thrinlé Khandro to produce the final, exquisite designs to decorate the sides and the lid of the Treasure Vases. Then a supplier had to be found to make the transfers (decals). Thrinlé made contact with a supplier in Harrogate in Northern England. About five gTérbum were used to test sample transfers. It was a problem getting the green and the yellow right, and at first the blue was too pale. Originally the green, air, side was to have a yellow background, but the yellow and green adversely affected each other, and so the yellow background was rejected in favour of green on its own.

Once the transfer designs were finalised, 120 of each colour and design were printed. Each colour of each element was a different transfer, which meant that there had to be two enamel firings for each vase. First firing: one colour on each side and on lid; second firing: second colour on three sides and on lid. Most of the transfer applications, and half the firings were completed in a week-long retreat in August 2001.