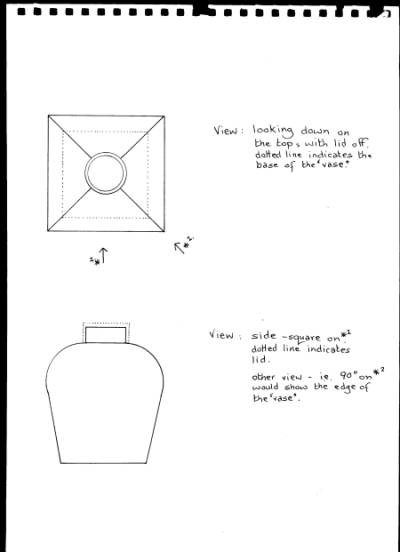 This picture shows the original line drawing of a gTérbum produced by Ngak’chang Rinpoche as the blueprint for the professional mould makers. It shows the shape and size of the gTérbum to be produced by the Aro UK sangha. At first it was thought that it might be possible to buy white ware that could be decorated. However, after quite an extensive search through ceramic suppliers catalogues and looking round major retail suppliers, it was found to be impossible to get hold of a lidded jar that was quite the right size and shape to transform into a Treasure Vase. Ngala Nor’dzin could find several varieties of ginger jar with six sides, but could not find one with four sides.

At this point it was decided to make the vases from scratch and Ngala Nor’dzin arranged to have professional plaster of Paris moulds made by a pottery in Stoke on Trent. From Ngak’chang Rinpoche’s designs, they made a block mould, a case mould and working mould for both the vase body and the lid. Once the moulds were ready, Ngala Nor’dzin experimented with a few casts from the working mould.

She recalls:
At first we thought it would be ideal to use porcelain to produce a high quality product. However the shape of the gTérbum meant that the neck of the vases tended to sag into the shoulder, at the high temperature firing required to mature porcelain. We finally settled on a china casting slip that was still slightly translucent and held the shape of the Treasure Vase at maturation temperatures.

Then Ngala Nor’dzin began experimenting with glazes on the chosen body, to attempt to bring Ngak’chang Rinpoche’s vision of the gTérbum into being. Rinpoche’s vision described the body of the Treasure Vases as blue on the inside and yellow on the outside, with these colours reversed on the lid. Unfortunately, owing to the translucent quality of the body, the inner blue glaze distorted the yellow outer glaze giving it a strange greenish hue. Also experiments with on-glaze colours revealed problems with producing clear, clean white on a coloured body. In the end it was decided to keep the ceramic body white with blocks of decoration complementing the shape of the vase. The decoration was to include representations of the elements and the syllable ‘dzam’ with an emphasis on the colours yellow and blue.

A small team of keen apprentices was assembled for a retreat to actually begin the project to make one hundred and eleven gTérbums. The process of slip casting involves pouring liquid slip into the mould, waiting until a film of clay has built up on the inside of mould, due to the absorption of water from the slip by the porous mould, and then pouring off the excess slip for re-use. With each casting the mould becomes damp, reducing its ability to absorb moisture and to allow a layer of drying slip to build up on its inside. Once the mould is damp, casting takes longer and is less efficient and successful, until it reaches the point that the mould is saturated and unusable until it has been dried out. It was therefore essential to make more working moulds, so that a reasonable number of bodies could be cast on a weekend retreat. With only one working mould, only one person could work at a time and only about three casts a day could be made. Hence the first task of the project was to make a further nine working moulds.

Ngala Nor’dzin said:
The first task in making new moulds was to seal the case moulds in order to cast working moulds from them. Plaster of Paris sticks readily to itself, so the case moulds had to be painted with soft soap to create a resistant barrier. Little did I realise that learning these processes at art college would be put to such auspicious use in the future!

The sides of the case moulds were slatted off with wood tied tightly to them with string. Liquid plaster solution was poured into the sealed case moulds. They were knocked to remove air bubbles and left to set. Once firm enough to handle, though still hot from the chemical reaction, the wooden boards were removed, and the edges of the moulds rounded off neatly with a knife.