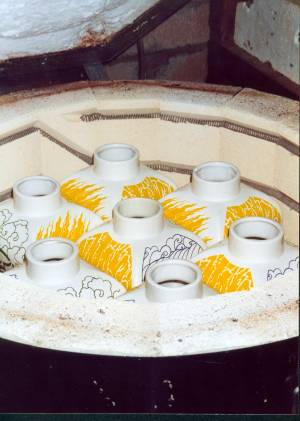 a kiln full of decorated gTérbums

The vases were slightly smaller now, having shrunk a little in the previous firings, so that Ngala Nor’dzin could fit eighteen vases in each kiln firing instead of fifteen. As before, the schedule of the retreat revolved around the needs of the gTérbum. It took about sixteen hours for an enamel firing to reach temperature and then cool enough for the kiln to be opened. Consequently every other day the gTérbum retreatants found they could fit in two firings by getting up really early to empty the kiln and repack it before morning practice, and staying up after evening practice to do the same.